International observers worry Canada’s approach may be too narrow 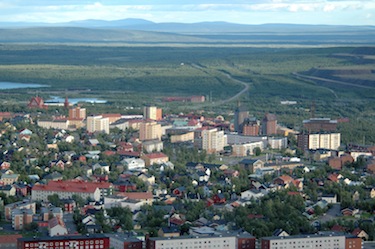 On May 15 in the northern town of Kiruna, Sweden, shown here, Canada will take over the chair of the Arctic Council from Sweden, (FILE PHOTO)

MONTREAL — Many observers involved in the Arctic Council outside Canada say they’re worried about what might happen when Canada takes over May 15 as chair of the eight-nation council.

Kristofer Bergh, a researcher with the Stockholm International Peace Research Institute, said April 26 that observers are nervous about the impending transfer of the chairmanship from Sweden to Canada.

Canada will assume the chair of the Arctic Council for the next two years May 15 in Kiruna, Sweden at a meeting of the top ministers representing the body’s eight member states.

Chief among the concerns cited by Bergh at the conference: a fear that Canada will politicize the Arctic Council and use the international forum as a platform to tout its own narrow domestic concerns — such as the Canadian claim to the Northwest Passage.

At the same time, many Arctic council members, like Sweden, want to “internationalize” the Arctic, for which Bergh said there hasn’t been much enthusiasm in Canada.

For example, member states like Sweden are open to the idea of admitting new observers, such as the European Union, China, Japan, South Korea and India, and even non-governmental organizations, including Greenpeace, at the Arctic Council.

And he said that while Canada may be angry at the EU for its stance on seal product imports, the idea of denying observer status to the EU on those grounds is misplaced.

That’s because the conflict is a domestic issue — not an international foreign policy issue, Bergh said.

If the EU is denied admission due to a lack of consensus on its admittance, that move could even lead to serious economic sanctions against Canada, Bergh and others suggested.

That’s not the only concern that Bergh cited about Canada’s two-year period as chair of the council: others see a potential conflict between the Arctic Council’s traditional role as an environmental protector in the Arctic and Canada’s role as an emerging energy exporting nation via the controversial Alberta oil sands.

Nunavut MP Leona Aglukkaq, who will act as Canada’s ambassador to the Arctic Council, has said the focus of Canada’s chairmanship will be on development for the people of the North, responsible Arctic resource development, safe Arctic shipping and sustainable circumpolar communities.

But Canada has provided little additional detail has been provided its two-year program, Bergh said.

There’s also concern that Canada will in general be less transparent than other past council-chair nations because Canada’s federal government has a more “behind closed doors” tradition.

Some observers have told Bergh that they like the appointment of Aglukkaq as minister responsible for the Arctic Council because of the symbolic value — an indigenous Arctic person acting as chair.

But they worry that Aglukkaq’s partisan responsibilities as an elected MP for Nunavut, federal health minister and minister responsible for the Canadian Northern Economic Development Agency will come first.

That also means that several departments are likely to be dealing with Arctic Council issues — the health department, CanNor, aboriginal affairs and foreign affairs, he said.

The appointment of career bureaucrat Patrick Borbey as chair of the senior Arctic officials during Canada’s chairmanship of the council has also raised eyebrows.

“Senior Arctic officials” is the term given to those diplomats and other civil servants from the Arctic Council’s eight member states who represent their countries between ministerial meetings.

As SAO chair, Borbey will continue to serve as CanNor president.

But he will also work closely with senior Arctic officials from the eight Arctic states that comprise the Arctic Council, as well as with the heads of the council’s six indigenous permanent participants.

But there’s concern that his responsibilities at the Arctic Council are likely to be too heavy for him to manage.

As well, some worry there’s likely to be conflict between Borbey’s northern economic development work and Arctic environmental needs.

“There a fear that this a perspective that will be brought to the council,” Bergh said.

If the Arctic Council falls short of expectations, the attraction of the recently-founded, more inclusive Arctic Circle group, sponsored by Iceland, could grow, he and others suggested.

As a result, the Arctic Council may end up doing little for the next two years before the chair passes to the United States.

On the positive side, another speaker at the conference, Joel Plouffe, an expert in Arctic security issues, said the May 15 meeting in Kiruna is receiving a lot of attention.

Plouffe said this demonstrates the increased attention that Arctic issues have received in recent years and the success of the Arctic Council since its creation in 1996.

At the very least, Canada’s second period of chair of the Arctic Council may highlight Canadian Arctic concerns in Canada, Plouffe said.