“The digital sites make science accessible to everyone” 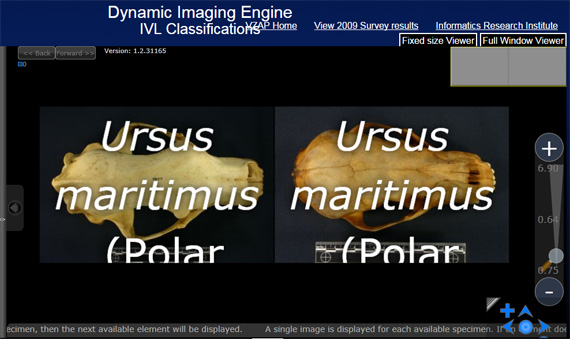 The online database of the Virtual Zooarchaeology of the Arctic Project allows researchers to look at the vertebrates of different Arctic animals.

Digital — and virtual — technology have helped Canadian researchers identify the remains of a Sadlermiut woman who was the victim of a 19th century polar bear attack on Southampton Island.

For more than a decade, archeologists and technicians from the Canadian Museum of History have been going through the huge Nunavut collection of human remains housed at the museum.

That’s because those remains are destined to eventually return home to Nunavut, as part of a repatriation process.

Before that happens, though, researchers wanted to analyse what they could while they had the opportunity.

One particular item caught the attention of museum archeologist Karen Ryan: the punctured skull of a Sadlermiut woman, which was first excavated from a settlement southeast of Coral Harbour in the 1950s.

“[Researchers] thought initially it could have been a gunshot wound, because there are holes on either side of her cranium,” Ryan said. “But when we looked again, we thought: If it wasn’t a gunshot, what could it have been?”

The remains of this woman were found partially exposed inside a tent ring on the outskirts of a Southampton Island settlement, which researchers think could have existed some time during the 19th century.

Researchers believe the woman was rescued after being injured and brought to this tent, where she died and was then covered in an organic material such as a skin.

Little is known of the Sadlermiut people who inhabited the island, Ryan pointed out, as the group was isolated from other Inuit groups until its people finally died off from disease and became culturally extinct in the very early 20th century.

Based on the isolation of the Sadlermiut, Ryan and her colleagues concluded the woman’s injury was not likely man-made, and began documenting the woman’s wounds.

“Then it became trying to figure out what animal [caused the injuries],” she said. “We’ll never be able to say definitely, but the evidence points to it being a polar bear.”

That evidence wasn’t easy to come by; Ryan said the delicate state of the skull made it hard to probe while trying to treat the victim’s remains respectfully.

So the team created a 3D digital model of the skull and sent it to the Idaho-based Virtual Zooarchaeology of the Arctic Project, an interactive collection of northern vertebrates, or animal skeletons.

There, technicians were able to reconstruct the attack and analyze the bite marks in the skull — comparing them with different Arctic species — without actually handling the skull.

“The most compelling thing for me was when the guys in Idaho imported a male adult polar bear into the model,” Ryan said, adding that it provided a close match. “We could say the polar bear that attacked the woman was the size of an adult female.”

So what’s the significance of such a finding?

Ryan said for one, it’s being able to understand what happened to a woman from a group of Inuit who are known to be extinct.

Although it’s a small detail, the reconstructed polar bear attack tells a story about life among the Sadlermiut.

“What struck me was how it makes you think about how the attack played out,” Ryan said. “Something horrible happened to that woman. It’s personal.”

The findings also highlight the advantages of digital technology and how a virtual lab allows for collaboration with different experts around the world, she said.

“With the VZAP site online, you can actually go to a museum or research centre without leaving the office,” she said. “If you live on Baffin Island, you could visit the site to learn more about muskox. The digital sites make science accessible to everyone.”

Ryan was the lead author of the paper “Identification of a Pre-Contact Polar Bear Victim at Native Point, Southampton Island, Nunavut, Using 3D Technology and a Virtual Zooarchaeology Collection,” recently published in the journal Arctic.