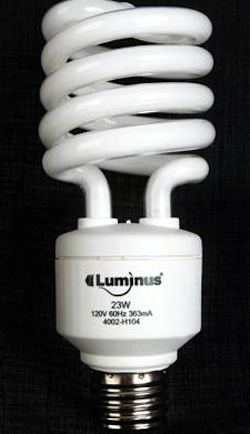 A minimum of three properties in Iqaluit were flooded this year as a result of the use of fluorescent light bulbs, according to city officials. Pictured, a compact fluorescent bulb. (PHOTO BY JENELLE SCHNEIDER/ POSTMEDIA NEWS)

A minimum of three properties in the Nunavut capital were flooded this year as a result of the use of fluorescent light bulbs, according to city officials.

Many Iqaluit residents rely on their water to be delivered by trucks. Iqaluit’s foreman of Truck Services, Keith Baines, believes the problem lies in the fluorescent light bulbs residents use for their outdoor fill-indicator light.

“By using the fluorescent bulbs in the cold of winter, there will be a delay from the time the float signals power to the bulb, and the bulb illuminating,” said Iqaluit Operations Supt. Frank Ford.

“These bulbs are filled with gas, which must be heated before they can illuminate. This time is variable, but can take as much as six to 10 seconds in -40 degree weather.”

During this time frame, Ford said there could be as much as 75 to 150 litres of water pumped.

“If their float is already set very high in the tank, and their overflow is blocked or frozen, there is no room for this extra water and an overflow occurs,” he said.