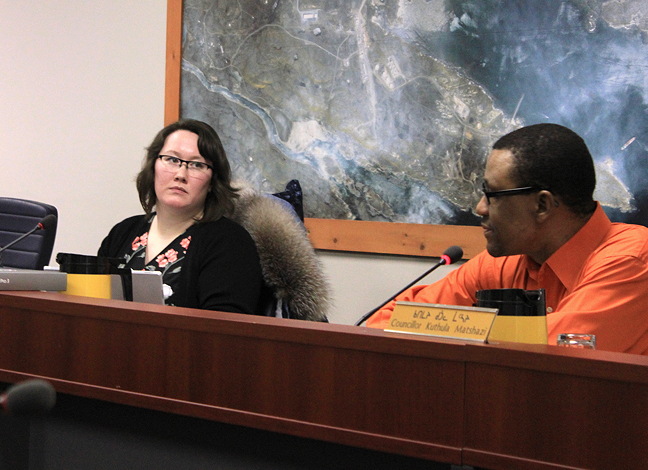 Megan Pizzo-Lyall with fellow councillor Kuthula Matshazi, at an Iqaluit city council meeting Jan. 10. Pizzo-Lyall announced at the meeting that she will be resigning from council to pursue a job outside of Iqaluit. (PHOTO BY LISA GREGOIRE)

Iqaluit’s first council meeting of 2017 started with a bombshell: Coun. Megan Pizzo-Lyall says she has all but accepted a job offer in another community and therefore, must resign her city council seat.

Pizzo-Lyall, who, at age 27, earned the second highest number of votes in 2015 after deputy mayor Romeyn Stevenson, delivered the news haltingly Jan. 10, pausing to collect herself. She told Nunatsiaq News later that the decision to leave was a difficult one to make.

“It was a tough decision but it’s one I’ve been sitting on for a bit now, but it’s the right one for me,” said Pizzo-Lyall, during a break in the meeting.

She thanked Iqaluit voters for having faith in her and trusting her to be a leader, and added that she appreciated the opportunity they gave her.

“We got a lot done and there’s not a lot of great stories in the media all the time about what we do but behind closed doors, we get great things done and that’s one of the things I’ll miss, and also being part of council, having the opportunity to make decisions that affect the whole city.”

Pizzo-Lyall began her member’s statement at the beginning of the council meeting by thanking the recreation department for their hard work organizing the Christmas games over the holidays, and then delivered the news of her resignation.

She was not prepared to offer details of her plans to leave Iqaluit, saying everything should be finalized by Jan. 13. Meantime, she said she will cherish her time on council.

Mayor Madeleine Redfern said councillors will be sad to see her go.

“Councillor Pizzo-Lyall has been a valuable member of council,” said Redfern.

“We’ve greatly valued her contributions in council meetings and discussions and deliberations and I understand that she’s made a decision to pursue opportunities outside the community. She will be greatly missed but we wish her the best.”

“She was intelligent. She was a great asset,” Dobbin said. “She will be missed.”

Pizzo Lyall’s departure leaves at least one looming question in its wake: will city council move to fill the vacancy?

“Going forward, I’m just wondering now, we’re down to six councillors, what’s going to happen next? That’s my major concern,” said Dobbin, during a break in the council meeting.

Iqaluit is supposed to have eight councillors but the municipality’s governing body was already one councillor short after Gideonie Joamie resigned from council in May 2015.

Councillors had several options to fill his seat—hold a by-election or offer the seat to the person who won the next biggest amount of votes in 2015—but they decided to press on instead with seven councillors and the mayor.

With yet another resignation, they may be forced to fill the vacancy.

A case in point—at the Jan. 10 meeting, the city had to appoint chairs and vice-chairs for 12 different municipal committees from recreation to disabilities, public safety and grievances and Coun. Joanasie Akumalik ended up as chair of five different committees. There just weren’t enough councillors to lead those bodies.

The city announced late in the afternoon Jan. 11 that it will hold a by-election to fill the spots left vacant by the departures of Pizzo-Lyall and Joamie.

The announcement said the date of that by-election will be set in the near future.