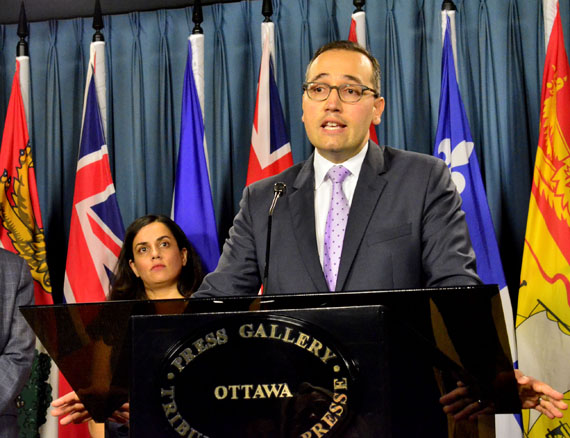 Toronto lawyer and Clyde River counsel Nader Hasan speaks to an Ottawa press conference July 26 following the release of a Supreme Court of Canada judgment quashing a seismic testing proposal in waters east of Baffin Island. Hasan says the ruling should not be misinterpreted to mean that the duty to consult Indigenous peoples lies with the National Energy Board;that responsibility remains with the Crown, he said. (PHOTO BY JIM BELL)

On July 26, the Supreme Court of Canada delivered two landmark rulings on the Crown’s duty to consult and accommodate Indigenous peoples.

Commentators around the country are asking what these decisions mean for government, industry and Indigenous groups. Many have heralded the Clyde River decision as a victory for Indigenous rights.

By contrast, some have read the decisions as industry-friendly and argue that they offer a “blueprint” on how to push pipelines and other projects through the National Energy Board or other regulatory agencies.

Ultimately, it will be up to the courts to determine how these rulings apply to future cases, but it is important to understand what the rulings did and did not say.

It would be dangerous and unhelpful if government and industry interpreted these rulings to mean the NEB process is good enough—as some outlets have suggested. Blind reliance on the NEB’s process is why the government was on the losing end of the Clyde River case.

It would also be wrong to suggest that the NEB alone can discharge the duty to consult Indigenous peoples. That duty continues to rest with the Crown.

What the Supreme Court held is that the Crown “may rely on steps taken by a regulatory agency,” but the “ultimate responsibility” for ensuring that consultation is adequate always rests with the Crown. And where the regulatory process being relied upon does not achieve adequate consultation or accommodation, the Crown “must take further measures to meet its duty.”

Practically speaking, this means the government must carefully scrutinize each and every regulatory process and determine what it can rely on and what else it needs to do to discharge its duty-to-consult obligations.

But consultation and accommodation may require more than an evidentiary hearing, particularly where the potential impact on Indigenous peoples’ rights is severe. Consultation may require negotiation on a nation-to-nation level. It may require that Indigenous groups be afforded not only the right to participate in the process but also a say in the design of the process. Tribunals such as the NEB can assist the Crown in discharging certain parts of consultation. Other aspects will require direct engagement from the Crown.

Finally, and perhaps most importantly, we must appreciate the limits of a court ruling—even a ruling from the highest court in the land. Courts do not tell governments what they ought to do as a matter of best practice and policy. The Constitution operates as a floor—not as a ceiling—and courts will intervene if government conduct falls below the minimum threshold that the Constitution requires. That is what happened in the Clyde River case.

Reconciliation will require respecting international law and Canada’s international commitments. Prime Minister Justin Trudeau should finally put his money where his mouth is and introduce legislation to implement the United Nations Declaration on the Rights of Indigenous Peoples, including the doctrine of free, prior and informed consent.

Consent is not a “veto.” It is an acknowledgment that for Indigenous peoples’ rights to be meaningful, they must entail corollary obligations on government. Consent will not be required in every case, but where the impact on Indigenous rights is substantial, nothing short of consent will respect those rights or achieve reconciliation.

The Trudeau government can choose to treat these Supreme Court decisions as a blueprint for helping industry through the regulatory process. Or it can embrace the spirit of these decisions, which urge the government to pursue a path of reconciliation with Canada’s Indigenous peoples.

We stand at a fork in the road of Canadian history. Let’s take the path of reconciliation. For real this time.

Toronto lawyer Nader Hasan is a partner at Stockwoods LLP and represented Clyde River at the Supreme Court of Canada. This column first appeared in the Globe and Mail.