Restaurant in Nunavut’s capital fights to save lease 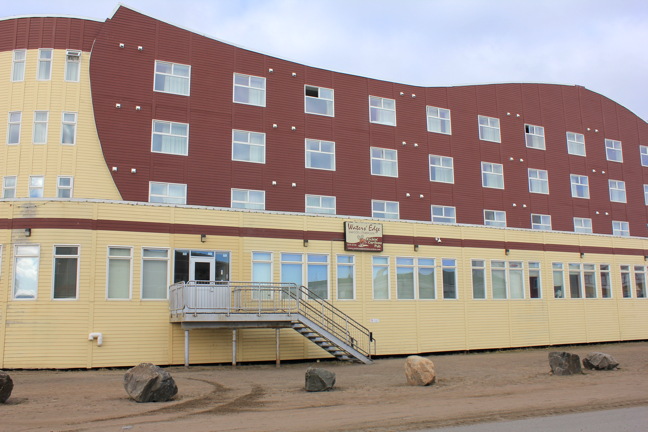 The Waters’ Edge Seafood and Steakhouse has launched court action against landlord Northern Properties to retain its lease at the Hotel Arctic. (PHOTO BY LISA GREGOIRE)

It appears from court documents, and preliminary proceedings June 12 at the Nunavut Court of Justice in Iqaluit, that the owners of the Waters’ Edge Seafood and Steakhouse at Iqaluit’s Hotel Arctic, fear losing their lease at the end of this summer.

In a statement of claim filed June 1, Donna Waters and Kim Waters, owners of the restaurant along with the adjoining Kickin’ Caribou Pub, claim that the building’s owners, NPR Limited Partnership, “has no entitlement to terminate the Lease in the circumstances prevailing.

“The purported termination, being unlawful and tortious, has and will cause loss, harm and damage to the Plaintiffs,” the statement of claim reads.

The Waters’ Edge restaurant has been operating at the Hotel Arctic (formerly the Nova Inn) since 2007. It’s located on Federal Road, just west of the Four Corners intersection.

According to lawyers, who spoke over the phone during court proceedings June 12, NPR Limited Partnership was served with the statement of claim late last week and has not yet responded with a statement of defence.

Sheila MacPherson, representing NPR, said in court that a statement of defence would soon be filed.

The restaurant owners say a lease extension, amending the lease and extending its term to 2023, “has been agreed to. The lease has been renewed and the amendments acted on.”

But something appears to have gone awry.

The Waters want the court to declare that the current lease is “valid, subsisting and in force,” and are seeking an injunction, “barring the Defendant from terminating the lease or from dispossessing the Plaintiffs from the premises.”

James Morton, lawyer for the Waters’ Edge, said in an emailed statement June 12 that the, “Waters Edge says they are entitled to continue to operate their Restaurant for many years to come. Ultimately a Court may have to decide who is right.”

NPR Limited Partnership’s corporate secretary Louise Elsey said late June 12 that it would be inappropriate to comment on this issue now that it’s before the courts.

Morton said in court that there is urgency to the matter because summer is fast approaching and the court has limited time to sit, and then rule on the claim, before the Waters’ Edge current lease expires at the end of August.

The matter is expected to come back before the court on June 17 for further scheduling.