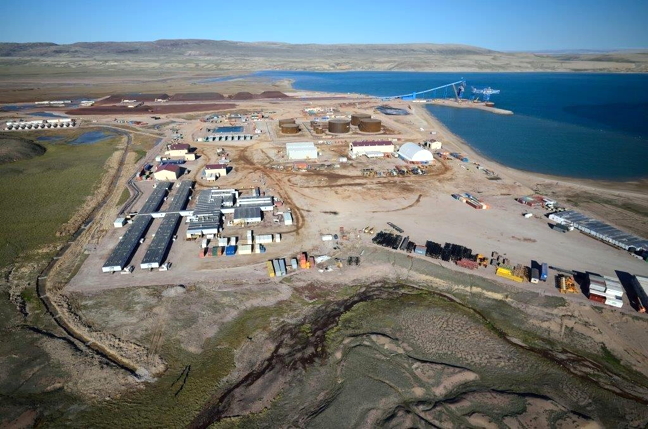 The Nunavut Impact Review Board is now requesting that Baffinland Iron Mines submit an addendum to its current final environmental impact statement detailing proposed changes, impacts and mitigation efforts of its Phase 2 Development which will include new and upgraded infrastructure at its Milne Inlet port, above. (PHOTO COURTESY BAFFINLAND IRON MINES)

The Nunavut Impact Review Board has recommended to Ottawa that the terms and conditions of Baffinland Iron Mines Corp.’s Mary River project certificate be reconsidered in light of significant amendments proposed by the mining company.

This perhaps comes as no surprise considering the extent to which the north Baffin iron ore project could change under the company’s proposal and the overwhelming view from stakeholders that any approval ought to be preceded by a full review and public hearings.

To do so, the company is hoping, among other measures, to increase shipping from three months of the year during open water season to a 10-month annual shipping cycle, from June to March, which would require ice-breaking in the winter and spring.

The 100-kilometre tote road, from the mine site, about 160 km south of Pond Inlet, to its port, would have to be upgraded as well to handle all that extra traffic so the company is proposing to widen it, twin it in areas and twin some bridges.

The company would also have to expand the port infrastructure to accommodate more staff, more ore stockpiles, more fuel and more services.

Most stakeholders who sent comments to the NIRB agreed that such changes trigger a provision under the Nunavut Land Claims Agreement that would require a project reconsideration.

The NIRB sent letters to both Bernard Valcourt, minister of Aboriginal affairs, and Erik Madsen, a Baffinland vice-president, informing them of their decision.

According to the NIRB, Baffinland must now prepare an “addendum” to its Final Environmental Impact Statement describing all aspects of its Phase 2 Development, relevant baseline data, impact predictions, mitigation measures, monitoring plans and proposed community consultation.

If everything is in order, the NIRB will then launch a public and technical review process that will include public information sessions in “potentially affected communities.”

The NIRB will then prepare a report detailing its recommendations and send that to Valcourt for review.

Baffinland is currently shipping ore to Europe as part of the mine’s “Early Revenue Phase.”