“Over the years, there have been loop holes and now we’re tightening those” 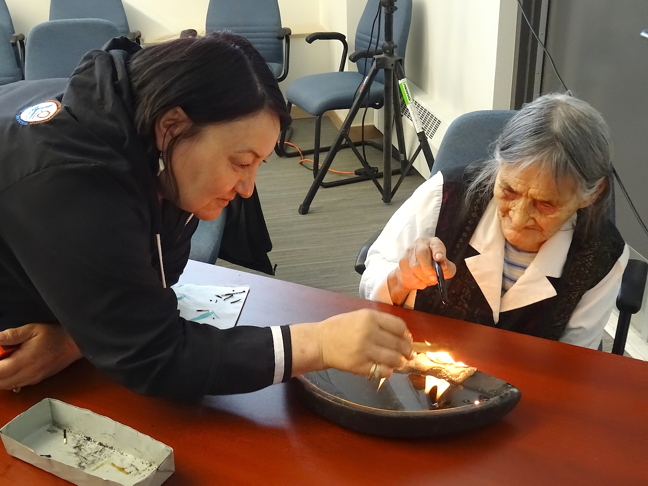 NTI President Cathy Towtongie helps an elder light the qulliq in September 2015. Towtongie says the revised Nunavummi Nangminiqaqtunik Ikajuuti policy has been submitted to the Government of Nunavut for approval. (FILE PHOTO)

Nunavut Tunngavik Inc. has signed off on revisions to the Nunavummi Nangminiqaqtunik Ikajuuti policy, or NNI policy, the organization’s president said in a recent interview.

That’s the policy designed to give Inuit firms an advantage when bidding on government contracts, a policy NTI helped to draft and implement with Government of Nunavut in 2000.

“The revised NNI policy has been presented to the GN,” said NTI President Cathy Towtongie.

Towtongie said she and the former Minister of Economic Development and Transportation, George Kuksuk, agreed to the revisions last year.

Taptuna reassigned Kuksuk to the family services portfolio in November 2015, and moved Monica Ell to the ED&T portfolio.

“I have been pushing the GN to make the revised NNI policy come into existence… Over the years, there have been loop holes and now we’re tightening those,” Towtongie said.

She offered no specific details but added, “I do hope the GN will pass the new policy soon.”

That article says that federal and territorial governments will provide “reasonable support and assistance,” to Inuit firms bidding on government contracts.

The policy adjusts contract bids by adding value to bids made by Inuit firms to give them an advantage over non-Inuit firms bidding on the same contracts.

But the NNI policy has yet to live up to its potential.

For example, a report tabled during the 2016 winter sitting of the legislature by the Department of Community and Government Services said the number of bids adjusted by the NNI policy remained “low” during the 2014-15 fiscal year.

It said NNI adjustments were made to fewer than three per cent of contracts awarded.

And while the overall volume of contracts awarded by the department rose by nearly 40 per cent over the past eight years, the report shows that the increase in contracts to Inuit firms was much more modest.

Inuit firms saw a six per cent increase in the volume of contracts over that time, while non-Inuit firms received 72 per cent more contracts, the report noted.

The Nunavut government commissioned a comprehensive review of the policy in 2012 — the third such review since the policy came into effect.

The GN made no revisions to the policy after the 2008 review, the report said, so many of the same problems persisted in 2012.

“The strengths and shortcomings of the NNI policy have been documented in previous comprehensive reviews… but still, the concerns that have infected the value served by the NNI policy remain,” the 2012 report said.