Group relieved, but says “there is no amnesty for the Arctic” 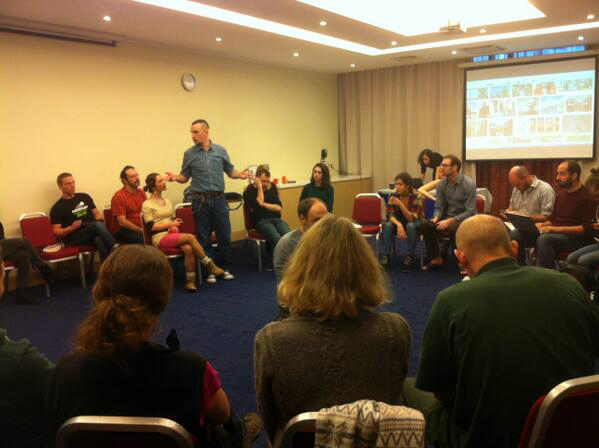 The Arctic 30 gathers Dec. 18 while the group awaits news of their amnesty, adopted in Russian parliament the same day.(GREENPEACE PHOTO)

Two Canadian Greenpeace activists are among a group of 30 set to be freed from custody after the Russian parliament adopted Dec. 18 an amnesty that will end legal proceedings against the group.

The Arctic 30 — made up of 28 Greenpeace activists, including Paul D. Ruzycki of Ontario and Alexandre Paul of Quebec, and two freelance journalists — have spent two months in a Russian jail.

Until now, the group faced charges of hooliganism and piracy following a September protest against oil exploration at the Gazprom oil platform along the Arctic coastline of northwest Russia.

The Duma officially adopted the amendment that extends an amnesty decree to those 30 defendants. That means the 26 non-Russians will be free to return home as soon as they are given exit visas by Russian authorities.

Greenpeace activists expressed relief Dec. 18, but also said in a news release that “there is no amnesty for the Arctic.”

“We may soon be home, but the Arctic remains a fragile global treasure under assault by oil companies and the rising temperatures they’re driving,” said Peter Wilcox, caption of the Greenpeace vessel the Arctic Sunrise, which transported activists to the September protest site.

“We went there to protest against this madness. We were never the criminals here.”

The Arctic Sunrise remains compounded in the Arctic port Murmansk, where it was towed followed the Sept. 19 Greenpeace arrests, despite the order of an international court that it be released following a case brought by the Dutch government.

The detention of the Arctic 30 garnered international attention over the last three months, with calls from across the globe to see the activists released.

The campaign to free the group included support from a number of international leaders and celebrities, including Paul McCartney, who penned a letter to Russian president Vladimir Putin.