“Of course I must finish what I started. And I can do it again”

The logo Sergey Ananov used to advertise his record-breaking journey around the world. 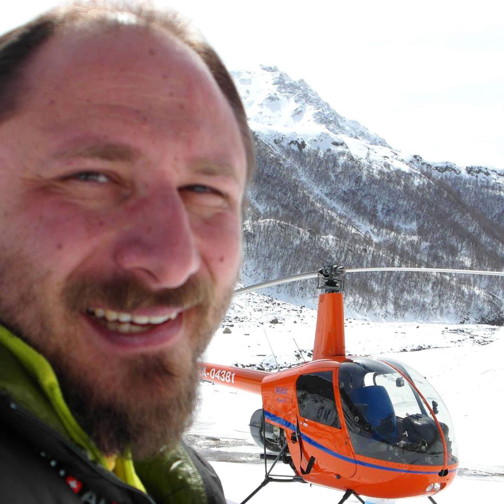 The globe-trotting Russian pilot Sergey Ananov with his helicopter, a two-seater Robinson R-22. The aircraft went down with mechanical failure July 25 over Davis Strait but Ananov was rescued and made his way to Iqaluit aboard the CCGS Pierre Radisson. (IMAGE FROM R22RTW FACEBOOK PAGE)

If you consider each element of Sergey Ananov’s unimaginable story — surviving a crash landing in Arctic waters, fighting off polar bears on an ice floe, a searcher’s fluky glimpse of Ananov’s last, dying flare — every part of it seems impossible.

On July 25, Ananov, a Russian citizen, crash landed between Iqaluit and Nuuk, Greenland, in the Davis Strait while attempting a record breaking solo flight around the world with a helicopter that weighs less than one tonne.

“In tropical conditions, you have a lot of time. But here, first day could be your final day. I managed two days,” said Ananov, on the phone July 27 from the Canadian Coast Guard Ship Pierre Radisson.

Ananov started his trek around the world June 13 in Moscow. On his forty-fifth day, he took off from the Iqaluit airport en route to Nuuk.

The 49-year-old ran into mechanical problems at the worst possible location — between Iqaluit and Nuuk, over the wide Davis Strait.

A belt that transfers power from the chopper’s engine to the rudder blades snapped. Ananov started going down.

It was foggy, but Ananov could just barely make out a large slab of ice below him where he aimed his landing.

Ananov didn’t hit the ice, but instead maneuvered a soft crash landing into the water.

While descending, with the helicopter’s blades still spinning, Ananov tilted the aircraft left so the blades entered the water first. He was sitting in the cockpit, on the right side.

Ananov undid his seatbelt, opened the door, reached for a life raft under his feet, and attempted to swim out of the cockpit.

“But my leg was stuck. And the life raft was stuck. So I need to dive into the water to undo my leg and my life raft. So it was not easy. But I had no time to take anything from the cabin,” Ananov said.

The Russian adventurer eventually struggled free and swam to a nearby ice floe with his wet suit half on.

“Very cold. It was very cold. But under stress situation, you don’t really imagine that. People just swim in ice for pleasure, in Russia this is. I never did so,” Ananov said with a laugh.

After pulling himself onto the thick, multi-year ice slab with what he managed to salvage from the helicopter — the life raft, a survival kit and a soaked wetsuit — Ananov said his “struggle for my so-to-speak life begins.”

For the next 35 hours, he had to battle two enemies.

The first was the cold.

“When you’re absolutely wet with the seawater and the wind and the low temperature and the ice below you … when you lie you feel like a fish in a supermarket, you know. Lying on the ice,” Ananov said.

The second was polar bears. He said there were three.

Wind blew more ice floes in his direction, meaning polar bears could walk freely towards him.

Within a few hours after the crash landing, the first polar bear paid a visit.

“One by one, I had three bears. Just came to me very close, like one metre,” Ananov said.

One of the bears approached while Ananov was huddled under his life raft, trying to preserve his energy.

Ananov said he heard the bear before he saw it.

Ananov said he scared them all away.

“I can be as frightening as a red devil. Popping out of my shelter, which was the life raft, I just made the fear to the bears so much that they ran away and I chased them up as far as I could have forces to do that,” Ananov said.

To “make the fear,” as Ananov says, he was “roaring and waving my hands, and do not pronounce a word but just do the animal sort of movements. And he was afraid.”

Ananov scared one polar bear away the first day and two polar bears the second day, he said.

“Big bears. As you see them in movies. Maybe a little bit yellow,” Ananov said.

In between fighting off the Arctic’s top predator, Ananov thought about the searchers above him. He could hear large aircraft buzzing in the sky but it was so foggy that searchers couldn’t actually see him.

“I heard them, I — so to speak — fired two flares of three that I had. And I saved the last flare for my last chance,” Ananov said.

Searchers didn’t see the flares through the thick fog.

“It was a beautiful sunset. It gave us a boost, we got really excited,” said Stéphane Julien, commanding officer of the Canadian Coast Guard’s Pierre Radisson icebreaker.

It took the crew of the ship about 24 hours of travelling time from Iqaluit to reach the area of Ananov’s last known position, where his SPOT beacon had stopped signaling.

The search and rescue team calculated where they thought Ananov might be, after drifting for about a day, and determined he was about 11 kilometres away from the crash site.

Miraculously, about 45 minutes after the fog cleared, a crewmember saw the last smidgen of Ananov’s last flare in the distance.

“My officer saw the flare just above the ice, and we saw the last second of it. Barely missed it,” Julien said.

The Coast Guard crew dispatched their rescue helicopter which landed on Ananov’s ice slab and scooped him up.

“What I heard, when he got into the helicopter, he just put his hand on the helicopter and it’s like he grasped the fact that he was now okay. He was alive, he was going to make it,” Julien said.

It may have felt like a birthday for the Russian pilot but it meant almost as much to the Coast Guard crew.

“There were cheers on the bridge. It was like scoring a goal on the last period of a hockey game in the Stanley Cup,” Julien said.

“Everyone was just out of their mind on the bridge,” he said.

Ananov had light hypothermia but wasn’t about to die anytime soon, Julien said.

“Tired. He was hungry. But nothing more than if he went on a long hike with little food. He was just exhausted but not to the brink of dying. Still in good shape,” he said.

Ananov called his wife and children from the Coast Guard vessel. He told his story to the crew and then recuperated while the vessel turned back towards Iqaluit.

Ananov reckons he probably would have died had he been forced to stay on the ice for another day.

“Hope was disappearing and I said the third day would be the last day of my survival.

“But lucky chance of the fog, disappeared. The guys from the Pierre Radisson made it possible, the rescue mission,” Ananov said.

Ananov was full of praise for the Coast Guard, and Canadian search and rescue efforts.

Hopefully they don’t have to save him again next year.

Ananov said he might take another run at the flying record again in 2016.

“Of course I must finish what I started. And I can do it again. But it requires time, money and a lot of efforts,” Ananov said.

Ananov was only about 5,000 km away from completing the 38,000-kilometre round trip.

“Very final stage. That is unfortunate. But good to be alive,” Ananov said.

The search involved at least two Hercules aircraft dispatched by the Joint Rescue Coordination Centre in Halifax, a Cormorant helicopter from Gander, Nfld., a Transport Canada vessel, a fishing vessel, and the CCGS Pierre Radisson.

Ananov and the Coast Guard are expected back in Iqaluit sometime July 29.