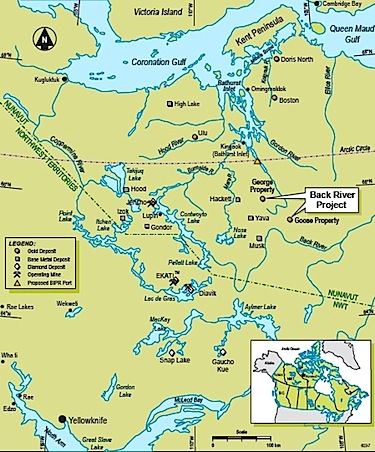 This map shows the location of Sabina Gold and Silver’s Back River project. (FILE IMAGE)

A pre-feasibility study at Sabina Gold and Silver Corp’s Back River project in Nunavut’s Kitikmeot region stresses a new focus on the lower cost of higher grade ore.

The company is still looking at operating an open-pit and underground mine about 75 kilometres from Bathurst Inlet that could produce roughly 5,000 tonnes of material per day.

But Sabina is now focused on less than half of the project’s resources, relying more heavily on open-pit production.

“Back River offers a rare opportunity for significant high grade gold production by both open pit and underground operations, in one of the world’s safest mining jurisdictions,” Sabina chief executive officer and president Rob Pease said in an Oct. 9 news release. “We believe we have presented an economically positive and realistic project as our base case.”

In August, Sabina announced it was seeing positive results from its summer drilling program, although the most recent study does not refer to drilling from 2013.

According to the company’s pre-feasibility study, Back River’s mill would process about 15 million tonnes of material over its lifetime with an average grade of 5.7 grams of gold per tonne.

That translates into 2.4 million ounces of gold over an eight-year period. A summer sealift would bring supplies to Bathurst Inlet, where they would be hauled by winter road to Goose, one of the project’s two mills, to facilitate mine construction and operations.

The George property, about 50 kilometres to the north of Sabina’s Goose property, could become “a satellite mining centre,” with its ore trucked to the main milling infrastructure at Goose.

Sabina plans to move ahead with the project’s feasibility study, while the project’s draft environmental impact statement is underway and should be filed in 2014.

Sabina hopes to move Back River into production by 2017.