“Just ask for it, to be better prepared” 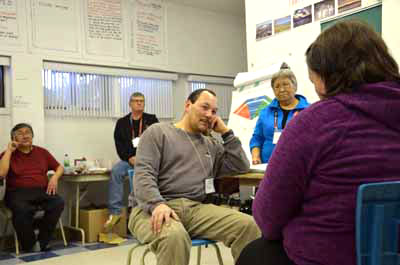 It’s been a long winter in Salluit.

The Nunavik village of about 1,300 people is a few souls smaller after a string of suicide deaths gripped the community over the last few months of 2014.

Death did not discriminate: first, a middle-aged construction worker, then a teenager, followed by a group of young Sallumiut in their 20s. A suicide that took place later in Inukjuak is thought to be linked.

“It was happening almost every second week,” said Michael Cameron, a community leader and coordinator of Salluit’s first responder program.

Over the period of two months, the community lost five people, leaving countless others in pain and grief, wondering how to prevent any more unnecessary death.

Cameron said he’s feared for his own fellow first responders, given their job descriptions. “I’ve been keeping my eye on them,” he said.

Minnie Grey, who returned to head the Nunavik board of health and social services in 2013 for a second time, said the painful news from Salluit has brought back difficult memories of other suicide crises the region has faced, particularly in Puvirnituq in the early 1990s and 2000s.

“I remember when I was here before 15 years ago, we were having multiple suicides every month,” she said. “I remember I used to dread picking up the phone.”

But something feels different this time around, Grey said, and it has to do with the region’s ability to respond to such a crisis.

Within weeks of the Salluit deaths, a local social worker had contacted the regional health board and requested to have trainers with Nunavik’s Applied Suicide Intervention Skills Training, or “ASIST,” visit the community.

The program, which aims to train both professionals and community members how to identify people who are at risk, drew its biggest turnout to date in Salluit last month, with 44 participants.

“The first morning is the hard part,” admitted Cameron, who signed up for the workshop with a few other first responders.

On the first day of the workshop, trainers show a video that features different scenarios involving people who are considered at risk of attempting suicide.

The video was filmed in Iqaluit, in Inuktitut, and was designed to put participants in that critical moment where they need to identify “invitations.”

“The video is so powerful,” she said. “It triggers so many emotions. It puts them in that moment.”

One of the workshop’s main goals is to “make it OK” to talk about suicide in a group, Kauki said.

Kauki and her fellow trainers help participants open up about peoples’ reasons for wanting to die, she said, in order to help identify their reasons for living.

“They come into the workshop very angry, very upset,” Kauki said. “But when they leave, they leave lifted.”

She knows that feeling well. Kauki, 25, was looking for support after she lost her brother a few years ago.

And she said she couldn’t find relief anywhere until she attended the 2012 Dialogue for Life, a suicide prevention conference in Montreal which featured an ASIST workshop.

“I thought, that’s it, that’s what I want to do,” Kauki said, weeks before leaving her job in employment support to work in suicide prevention.

“And it’s working,” she said. “It helped save my own life — for sure it’s going to save other people’s lives.”

But ASIST is one of the few programs developed elsewhere — through the Living Works training institute — that has been easily adapted to an Inuit community setting, say Kauki and Grey.

“Yes, we have support from outside,” Grey said, “but more and more we have to take ownership and responsibility of making sure that we are taking action against suicide.”

Today more than 100 Nunavimmiut have been trained with ASIST.

Recently Jaanimmarik high school in Kuujjuaq has requested that trainers host a workshop for school staff which would make it one of the region’s biggest ASIST workshops to date.

Now, well into the month of March, the days are getting longer and brighter in Salluit, and 44 community members have suicide prevention training under their belts.

“It really opened up a lot of our eyes,” he said. “Yes, we’ve dealt with suicide, but it was also putting those emotions aside and being one with the person you’re dealing with.”

“Just ask for it,” Cameron said. “To be better prepared.”

If you are struggling with thoughts of suicide, you can call the Nunavut-based Kamatsiaqtut helping toll free, 24 hours a day at 1-800-265-3333.