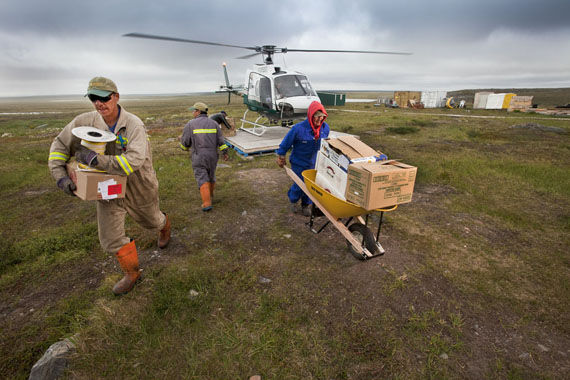 Athabasca Dene in northern Saskatchewan say they have not been properly consulted on Areva’s Kiggavik uranium project near Baker Lake.

Although the Kiggavik site is hundreds of kilometres away from their traditional lands, the Athabasca Dene oppose the proposed transportation of milled uranium — known as yellowcake — by plane from the mine to northern Saskatchewan.

Areva proposes to fly some 5,000 tonnes of yellowcake each year to Points North, Saskatchewan, where it would then be transported by truck or train.

In December 2013, the Athabasca Denesuline Né Né Land Corp., which represents First Nations in Black Lake, Fond du Lac and Hatchet Lake, passed a resolution opposing the transport of uranium over their territory.

In a letter addressed to the Nunavut Impact Review Board that same month, the corporation said Dene are worried about accidents and the potential damage to their local environment.

In a response, the NIRB noted that this transportation option was identified in the initial project proposal in 2008, and asked the corporation to address its concerns directly to Areva.

But the Athabasca Dene sent a second letter to the NIRB Jan. 14, saying the Kiggavik review process has “failed to provide us with any comprehensive information on what the impacts would be.”

The corporation went on to request information on impacts and mitigation measures in the event that a plane carrying yellowcake crashed in its traditional territory.

“How would the Areva clean up of the dispersion of powder-like uranium concentrate in lakes? Rivers?…” said the Jan. 14 letter. “How would a spill of this magnitude impact on migratory barrenground caribou populations?”

Now, the NIRB is looking at the corporation’s latest request to determine if and how to respond.

That’s because many of the corporation’s concerns and requests fall outside of the NIRB’s mandate, said the board’s executive director, Ryan Barry.

“There’s a lot in the letter that AREVA needs to speak to,” he said. “They want information filed directly to them, but we don’t send it to specific organizations.”

Barry says the group was made aware of the Kiggavik project’s developments as soon as the NIRB began its screening process.

The NIRB has already asked Areva to do more consultations with groups affected by its uranium project.

That was one of the many requirements the review board outlined in its Pre-Hearing Conference Decision that it issued to Areva in July 2013.

In that report, the NIRB made or confirmed several decisions that will set out how its environmental review of the Kiggavik will be done, and what commitments Areva must observe when writing its final environmental impact statement (FEIS) on the Kiggavik project, due this fall.

Some of those requirements include providing an “updated ecosystem-based understanding of the Kivalliq region ecological landscape, including caribou herd designations, spatial distributions, important seasonal movements… and sensitive habitats.”

The report also asked Areva to produce a map indicating all areas where aircraft are likely to fly below 900 and 610 metres.

To date, Areva’s Kiggavik includes two sites, one called Kiggavik and the other called Sissons, located about 80 kilometres west of Baker Lake.

Kiggavik would include three open-pit mines and a processing mill, while Sissons would have another open-mine pit as well as an underground mine.

The company’s proposed infrastructure also includes a landing strip, worker accommodation, access roads to Baker Lake and between the two mine sites, and a dock and storage facility at Baker Lake.

Areva toured the region last fall in its final round of community consultations before it drafts a final environmental impact statement, due Sept. 2014.

The mine could be in production by 2020.