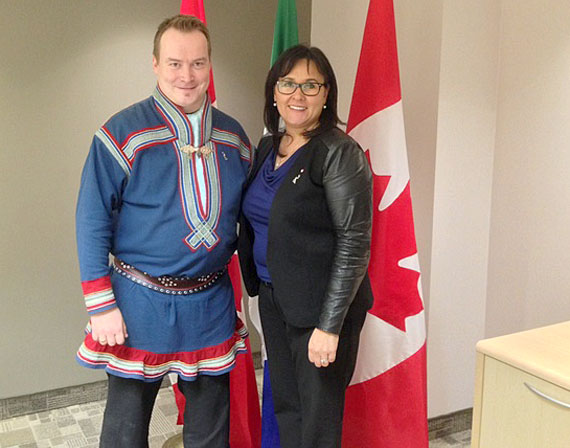 Anders Oskal of Norway, the executive director of the International Centre for Reindeer Husbandry, with Nunavut MP Leona Aglukkaq in Whitehorse, Yukon this past winter. Oskal will represent the Saami Council at the founding meeting of the Arctic Economic Council in Iqaluit, which starts Sept. 2. (PHOTO: INTERNATIONAL CENTRE FOR REINDEER HUSBANDRY)

Canada’s heavily-touted Arctic Economic Council will start to take shape next week in Iqaluit, when Nunavut MP Leona Aglukkaq, the Canadian minister responsible for the Arctic Council, presides over its founding meeting.

“The Arctic Economic Council will facilitate business opportunities, trade, investment and growth in the best interests of northerners,” Aglukkaq said this past July when she announced the Iqaluit gathering.

The two-day meeting, set to start Sept. 2 in Iqaluit, will bring together representatives from the Arctic Council’s eight members states and six indigenous permanent participant organizations.

Nunatsiaq News has learned that the Arctic Council will hold the meeting at the Frobisher Inn. And late on Aug. 29, Nunavut premier Peter Taptuna said he will co-chair the gathering with Aglukkaq.

By the end of the gathering, delegates will have created an independent circumpolar body that will maintain a close relationship with the Arctic Council.

The economic council will control the size of its membership, determine its own structure, governance and activities, and accept “self-nominations” from Arctic businesses, said a document released Aug. 26, following a meeting of senior Arctic officials in Yellowknife.

But the economic body will interact with the Arctic Council and may submit proposals and reports to the eight-nation body, the document said.

And the Arctic Council may also propose areas for the economic council to focus on, starting with “responsible resource development.”

The delegates confirmed for the Iqaluit meeting include indigenous people from around the circumpolar world, especially those involved in business or economic development.

The Inuit Circumpolar Council will be represented by Tara Sweeney, executive vice president of the Arctic Slope Regional Corp.

Ed Schultz, a former grand chief of the Council of Yukon First Nations, and Richard Nerysoo, a former Northwest Territories government leader, will represent the Arctic Athabaskan Council, which speaks for Dene and Athabaskan language groups living in the NWT, Yukon and Alaska.

The Russian Association of Indigenous Peoples of the North, or RAIPON, will send vice president Lyubov Peshperova and Alexey Panov, an entrepreneur.

And Anders Oskal of Norway, the executive director of the International Centre for Reindeer Husbandry, and Anders Blom of Sweden, the managing director of a company called Njalla AB, will represent the Saami Council.

In addition, each of the eight members states have named their representatives, many of them executives with companies involved in shipping, tourism, mining, communications and oil and gas development.

Other delegates will represent various chambers of commerce and ship-owners’ associations.

The federal government has not said if the meeting is open to the public.