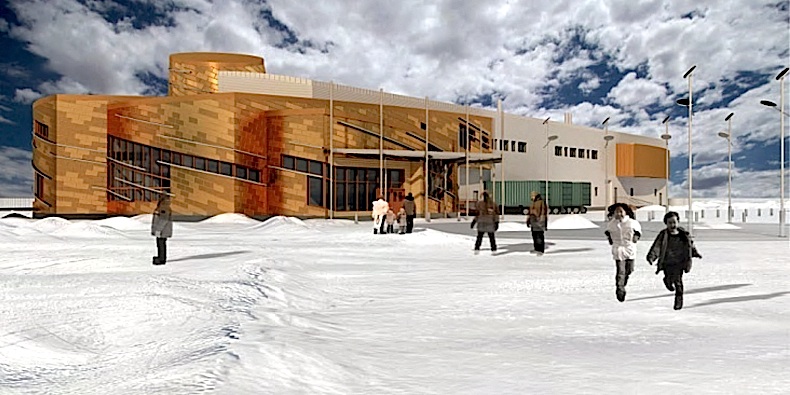 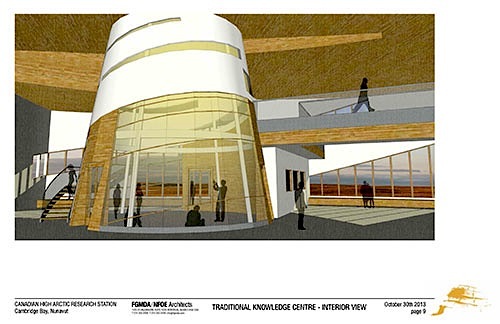 This is how an artist depicts the traditional knowledge centre which will be inside the main science building of the Canadian High Arctic Research Station. (HANDOUT PHOTO) 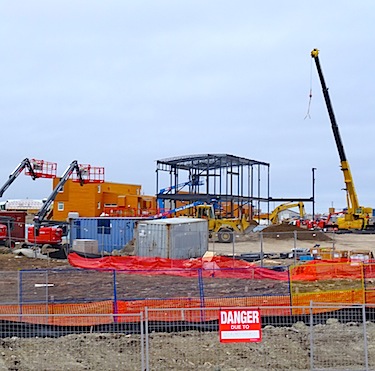 The main science building of CHARS is now under construction. (PHOTO BY JANE GEORGE)

CAMBRIDGE BAY — Girder by girder, the Canadian High Arctic Research Station in Cambridge Bay is taking shape — with one foot grounded in science, the other in technology and with its heart, many hope, rooted in traditional knowledge.

The CHARS main science building, which, at 50,000 square feet, is set to become the largest building in Canada’s North, will feature a traditional knowledge centre at its core.

But how the relationship between traditional knowledge and the research station’s development-directed mandate will play out remains uncertain.

In this western Nunavut town of about 2,000 people, you’re sometimes struck by the differences between the scientific and traditional approaches to the world, such as when you hear the calm conversation of elders speaking in Inuinnaqtun as they work on a sealskin wall hanging at the May Hakongak library and cultural centre and then the sounds of banging, drilling and sawing at the nearby CHARS site.

There’s nothing low-key about CHARS, set to open July 2017 on Canada’s 150th birthday. Even before the research station’s 60 jobs and 20 new homes come into town, it’s clear from the lineup of sea cans along the road that CHARS is a big addition to Cambridge Bay’s economy.

You can feel how CHARS has already brought in a lot of money and business into Cambridge Bay: local contractors are busy and some entrepreneurs have started new businesses, such as a bed and breakfast, a catering service and a new restaurant.

For the non-profit Kitikmeot Heritage Society, CHARS also means research contracts connected to traditional knowledge, for a data base for a future website where researchers will share results with Nunavut communities, a guide to help researchers work with Inuit, and a historical timeline for the region.

But traditional knowledge is nowhere to be found in the act that created CHARS, which says CHARS’ mandate is to undertake scientific research and develop technology.

Will that mandate drown out the traditional knowledge of the Inuinnait in Cambridge Bay, where most people have already lost their Inuinnaqtun language?

Being at the cutting edge of new technology presents a familiar challenge for Cambridge Bay: since the 1950s, Cambridge Bay has taken on a role in the defence of the Arctic. The large white radar bulbs of Cam Main former distant early warning site, now operated by the defence contractor Raytheon, still dominate the horizon.

Similarly, the ultra-modern buildings of CHARS now stand as beacons for future resource development in the North.

According to a CHARS document, CHARS wants to strengthen the information base for assessment, regulatory approvals, and management for resource development in the Arctic.

“This will increase certainty for industry investment, support tracking the net benefits of a stronger economy, and provide management tools for decision-makers in the private and public sectors,” it states.

Researchers at CHARS will try to mobilize science and technology to solve “key national issues in the North” — and maybe even patent their solutions.

That’s because, under the the CHARS act, the centre has the ability to design, trademark and receive fees from patents, copyrights and trademarks.

Among the CHARS priorities: to work on increasing the marine security of the Northwest Passage, already cited as a safety and security hole by some Cambridge Bay residents in a recent consultation on tourism.

To that end, CHARS — unlike the Cam Main radar site which looks up to the skies — will dive underwater to protect Canada and aim to improve the “effectiveness, endurance, and reliability of fixed underwater observing systems and unmanned underwater vehicles.”

CHARS will also undertake research and technology development on infrastructure, such as water and waste-water treatment, roads, and housing, all good news for the Hamlet of Cambridge Bay, which recently embarked on a recycling program.

Traditional knowledge does stay in the picture: researchers responding to the CHARS request for proposals on “Strengthening Northern Monitoring” and “Northern Regions of Significant Resource Development (the resource rich areas around western Nunavut, Baffin Island and Hudson Strait,) earmarked for $12 million until 2018, are encouraged to think about traditional knowledge because “Northern communities have a wealth of knowledge that can enrich the content of research and monitoring.”

Researchers are also supposed to say how their projects will “utilize local and/or traditional knowledge, unless not applicable.”

CHARS guidelines also require that “all funded projects be carried out in partnership with Northerners.”

“Scientists are encouraged to work with community leaders, Elders, hunters and other knowledgeable individuals to incorporate traditional knowledge into the design and conduct of the study. Community input to the research is important, as are sensitive and sound researcher — community relations; all must be clearly demonstrated in project proposals,” the guidelines say.

Presentations on CHARS to annual general meetings recently held in Cambridge Bay, from Inuit Tapiriit Kanatami and the Kitikmeot Inuit Association to the Nunavut Association of Municipalities, also touted research as a fun job, by showing photos of students who collected flowers last summer on the land for a baseline botanical study.

Students at Nunavut Arctic College’s Environmental Technology program in Cambridge Bay are being groomed to serve as future CHARS research assistants. Various outreach activities also encourage students in Cambridge Bay to think more about science careers (although Kiilinik High School may see its science students obliged to study online due to a lack of teacher-resources.)

CHARS chief scientist Martin Raillard told Nunatsiaq News that he hopes the station’s efforts will inspire growth and sustainability, locally and beyond.

“We have the hope it can be a really cool exciting story for Canada,” Raillard said.

Its nine-member board now has one Inuk representative, Nellie Cournoyea, chair of the Inuvialuit Regional Corp.

A view to the CHARS building site, where two triplexes can be seen to the left, with the main science building under construction in the centre of the photo. The finished maintenance building stands behind the frame of the science building. (PHOTO BY JANE GEORGE)