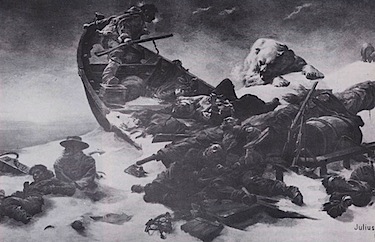 At its time, the loss of Sir John Franklin and his 128 men, who, as depicted here as they attempted to reach safety, was an enormous disaster, one which continues draw the interest of historians and others. (FILE IMAGE)

A Parks Canada-led team of researchers is trying — again — to unravel the ultimate Arctic mystery: the whereabouts of the lost ships of the ill-fated Franklin Expedition.

The experts are armed with everything from historical Inuit testimony and the scrawled writings of 19th-century explorers to state-of-the art seabed scanners and the latest computer simulations of ice movement through the Arctic Archipelago.

And while underwater archeologist Ryan Harris and his colleagues from a host of federal and Nunavut government agencies are optimistic that this could be the year for a worldshaking discovery, they know they’re not the first to harbour that hope.

Still, the veteran Parks Canada diver and marine historian is excited about fresh data being supplied by Canadian Ice Service scientists that should help the search team retrace what happened to the stranded Franklin ships more than a century and a half ago — and to help pinpoint where they might lie on the bottom of the Arctic Ocean.

“They’ve undertaken a historical ice climatology study to help us narrow our search area,” Harris said in a preexpedition interview. “It’s quite innovative. It’s looking back at archived Radarsat ice imagery and trying to reconstruct patterns of ice formation, drift and breakup” in the waters known to have been sailed by Sir John Franklin when his ships — HMS Erebus and HMS Terror — fell prey to pack ice 165 years ago.

The freeze-in led to the loss of the two vessels and, eventually, to the deaths of Franklin and all 128 men under his command.

“There were some very simple questions which we didn’t know the answer to, like what happens to the ice coming from Victoria Strait? Does it all go west of the Royal Geographical Society Islands or does it bifurcate?” asks Harris, noting that a key pinch-point appears to lie where the Victoria Strait reaches the southerly Alexandra Strait near the southeast tip of Victoria Island.

The ice “bottlenecks at the top of Alexandra Strait and that is the area where one of the vessels luckily made it through and the other got pinched and sunk.”

It appears that the ice data “reinforces our suspicion that there’s a big stoppage as it enters Alexandra Strait” and that “this is what imperilled the expedition in the first place.

“Once they were caught in the ice in the eastern portion of Victoria Strait, it’s almost like a peristaltic effort to get it eventually to come out into Alexandra Strait,” Harris said. “It’s just a terrible blockage point, and Erebus and Terror unfortunately got caught up in this, and that was ultimately their undoing.”

Previous searches by federal scientists in 2008 and 2010 were steered by historical reports that situated one of the lost ships – disabled but finally freed of the Victoria-Alexandra ice jam – near O’Reilly Island, southwest of King William Island in a body of water just off mainland Canada, the Queen Maud Gulf.

This year’s search is targeting an area farther north, between Victoria Island and King William Island, where the other ship is believed to have gone down after remaining trapped near the smaller Royal Geographical Society Islands.

And, at least for now, Parks Canada has the full and enthusiastic backing of the Canadian government in its bid to find one of the famous wrecks.

“The sense is that we’re close – oh, so close – and there are big hopes this might be the expedition that locates it,” Environment Minister Peter Kent told Postmedia News this week.