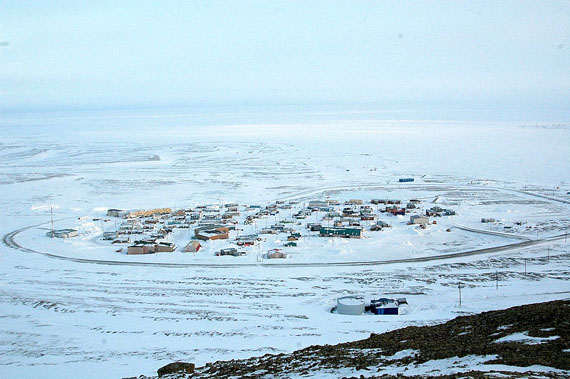 A view of Resolute Bay, in an undated file photo. Searchers found Oolateetah Iqaluk walking back to the community June 20, about 16 kilometres north of the community. Iqaluk had gone missing June 15, when his snowmobile broke down near the centre of Cornwallis Island. (FILE PHOTO)

Resolute Bay searchers and rescue teams found Oolateetah Iqaluk as he was walking back to the community June 20, six days after he was lost on the land.

Iqaluk was lost in a snowstorm while travelling by snowmobile with a hunting party June 15 near the centre of Cornwallis Island, more than 40 kilometres north of the community, Resolute Bay RCMP said.

“He got separated from the hunting party in a storm,” said Philip Manik of the Resolute Hunters and Trappers Organization, who helped in the search.

“We had pretty well everything when he was lost — snow, rain, and wind,” Manik said of the storm.

Temperatures dipped well below zero at one point during the six-day search, he said.

“The ground even froze. We were getting a little concerned.”

Iqaluk, who is in his 50s, got lost while trying to find his way back to the community, Manik said.

The missing man’s snowmobile broke down as he navigated through melting snow and ice.

“He had to walk after that.”

“He was in rough shape, as you can imagine,” Manik said, but in good health even though he had been walking without food for most of the six days.

The season for snowmobiling has practically ended around the High Arctic community, he added.

Atco Structural and Logistics Ltd. helped the search by lending three snowmobiles for the effort, the Resolute Bay RCMP said.