Secrecy at Nunavut lender may continue despite calls for transparency 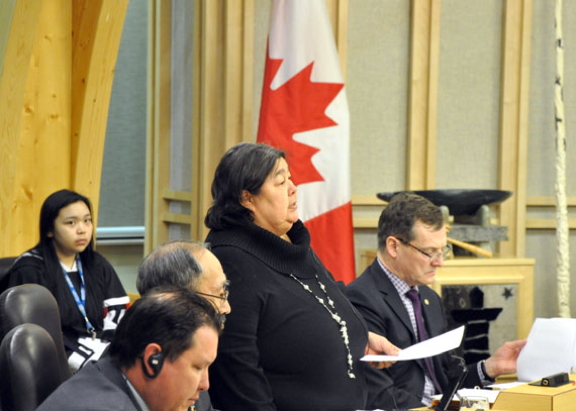 Monica Ell-Kanayuk, the Government of Nunavut’s economic development and transportation minister, responding to questions in the Nunavut legislature from Iqaluit-Niaqunnguu MLA Pat Angnakak June 8, offered no guarantees that the high risk lender, Nunavut Business Credit Corporation, would disclose who it gives money to. (FILE PHOTO)

The minister responsible for the Nunavut Business Credit Corp. says future reports will be “structured differently” but would not outright confirm if the arms-length public lender would publish the identities of its debtors.

Economic Dvelopment and Transportation Minister, Monica Ell-Kanayuk, said board members for the lending agency were still reviewing her letter of expectation to the NBCC for the current fiscal year, as she responded to a series of questions from Iqaluit-Niaqunnguu MLA, Pat Angnakak, at Nunavut’s legislature, June 8.

“We have urged them to work on something like this,” Ell-Kanayuk said, referring to calls from both Nunavut MLAs and the territory’s privacy commissioner to publicize the names of individuals or companies who benefit from the agency’s roughly $21 million portfolio.

But the NBCC’s board of directors is “still considering it” after meeting in Iqaluit shortly before the legislature’s summer sitting, Ell-Kanayuk said.

“Moving forward, we can expect that their annual reports will be structured differently,” she said.

Ell-Kanayuk added that her letter of expectation also requested a “comprehensive report of all the procurement contracting and leasing activities undertaken by the NBCC,” but she was not clear if that report would be published in the agency’s publically available annual report or provided internally to EDT.

Ell-Kanayuk also confirmed to Angnakak that her department would not pursue an amendment raising the maximum lending amount for an individual NBCC client to $2 million, up from $1 million.

For the last two years, the NBCC has requested that its current lending amount, controlled within the agency’s accompanying legislation mandate, be increased by the government.

“With the current staff complement, it is just not possible to do all of our wish list,” Ell-Kanayuk said, adding that the amendment is “not slated for this government.”

The NBCC has come under increasing scrutiny from Nunavut MLAs who argue that the lack of transparency within the corporation prevents effective oversight by the Government of Nunavut.

In 2012, the agency lent almost $1 million to David Wiseman, a taxi company operator in Rankin Inlet, to purchase equipment and pay for renovations at his taxi hanger.

Wiseman now faces two criminal charges alleging he fraudulently falsified insurance claims for fire damages amounting to more than $56,000. Those allegations have not yet been proven in court.