“Even when you maintain them, they keep breaking down” 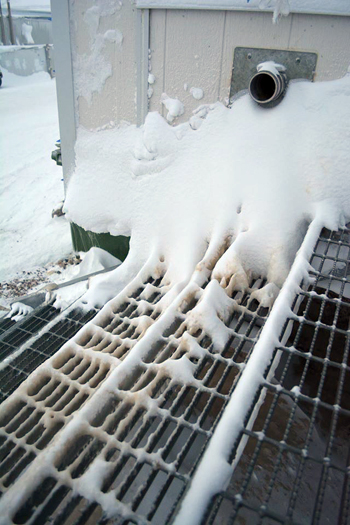 Adamie Kalingo took this photo of the leaking septic tank outlet outside his home in Ivujivik last week. (PHOTO BY ADAMIE KALINGO)

KUUJJUAQ — By the time three of Pond Inlet’s four sewage trucks had broken down, the north Baffin community had finally seen enough.

With sewage overflow frozen to the ground, and busted sewage tanks forcing some residents out of their homes, the hamlet called a state of emergency earlier this month to draw attention and support.

But what might appear to be an extreme case for one Arctic community could be considered almost commonplace for others.

During the 2014 Christmas holidays, four of the five sewage trucks in the Nunavik community of Salluit had broken down, leaving its one functioning truck working through the night.

“Even when you maintain them, they keep breaking down,” Putulik Papigatuk, the regional councillor for Salluit, told the Kativik Regional Government council meeting Feb. 25.

It’s been a problem for years, he said, but people have grown used to it — once the municipal office is down to just a few trucks, the community is informed by radio. And they’ve learned to cope, Papigatuk said.

Part of the problem in Salluit is the community’s steep hills, which are difficult for heavy trucks to climb. But the community should receive a new sewage truck by sealift next summer.

In the nearby village of Ivujivik, one resident says he’s learned to deal with ongoing issues with the community’s two sewage trucks — only one of which has been working in recent years.

“We’ve had problems just about every winter,” said Adamie Kalingo, a local community worker and former mayor of the community of 370. “Every week this year, there’s at least a day where my family can’t use the running water.”

And the problem is only getting worse as the community grows; Kalingo said that since new housing was built in 2014, the one sewage truck is servicing 93 homes, plus the town’s other institutions.

“We have days where the truck will work overtime, into the night,” he said. “But the town is suffering.”

When the sewage tank is full in his own household, Kalingo said his wife and son often go to the local water plant to collect water in a four-litre container, which is mostly used to make tea and juice.

But the community needs a more permanent solution, he said.

Following the breakdown of the community’s only working sewage truck Feb.18, the KRG’s department of municipal and public works said it sent a mechanic to the Hudson coast community.

“The truck should be repaired shortly,” the KRG said in a Feb. 25 email to Nunatsiaq News. “The [northern village] is providing services with the one truck at the moment.”