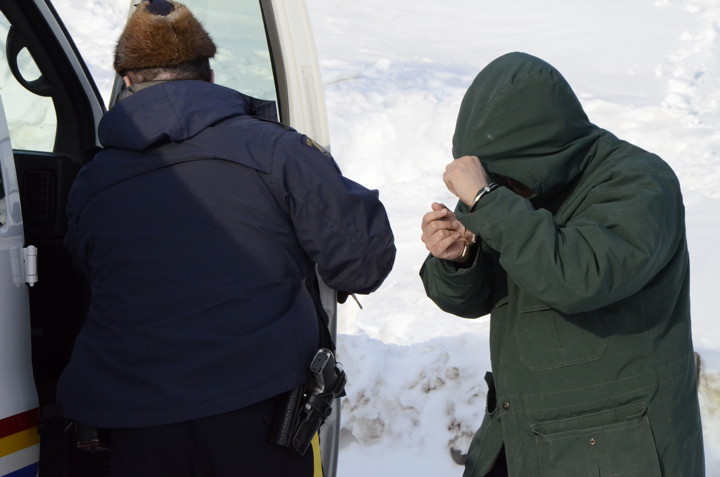 Billy Iblauk covers his head as he is escorted from the Nunavut Court of Justice. (FILE PHOTO)

After two days of inconsistent and conflicting statements made in court by two child witnesses, all nine sex charges against Billy Iblauk were either withdrawn or dismissed April 17 at the conclusion of the Arviat man’s second trial in a week at the Nunavut Court of Justice in Iqaluit.

Justice Bonnie Tulloch found there is not enough evidence to prove beyond a reasonable doubt that Iblauk, 28, ever touched two child complainants — a girl and a boy, each under the age of 13 at the time of the incident — at Iblauk’s house in August 2011.

Defence lawyer Tamara Fairchild said there were more than just contradictions between the two children’s stories. “There were flat out lies,” she said.

The two children told their stories in a separate room linked by video-conference to the courtroom where he stood trial April 16 and April 17.

This was the second of two trials in a week for Iblauk — the first involved one child complainant and stemmed from an October 2011 incident.

During the second trial, the boy witness said Iblauk and the girl kissed in Iblauk’s bathroom, that the two were boyfriend and girlfriend, were naked, and “were fucking” in a locked room.

But later, the boy said he did not see when the two took their clothes off.

The girl said during examination and through an interpreter that no touching or sex happened, but that Iblauk was “stark naked” and wanted to “imitate a sex act” — even though Iblauk never asked for any sex act.

The girl said she stripped to her panties on Iblauk’s instruction and also said the boy gave Iblauk hickeys.

Crown prosecutor Priscilla Ferrazzi pointed out in final arguments that Iblauk had hickeys on his neck when an RCMP officer arrested him, shortly after the allegations were reported.

But the girl admitted to Fairchild during cross-examination that she lied to the RCMP in an interview over two years ago about kissing and touching — an interview that included an allegation that Iblauk touched the young boy’s penis.

The girl agreed with Fairchild that Iblauk scared her, and that she told the lies so she wouldn’t get in trouble after Iblauk said he would tell their parents that the two were making trouble and smoking.

Both children accused the other, during testimony, of either asking for or smoking a cigarette at Iblauk’s house.

“They feel there’s some perception of being bad or naughty,” Fairchild said.

Ferrazzi withdrew five of nine charges against Iblauk while giving her final arguments.

Tulloch, presiding over the case without a jury, and visibly exhausted from the two-day trial, rubbed her face with the palms of her hands before dismissing the remainder of the charges.

Tulloch said the two children’s stories were “very inconsistent” and she had “no doubt” the Crown failed to prove beyond a reasonable doubt that Iblauk committed the offences.

“This was a very hard case in terms of these young people,” Tulloch said.

Both children struggled to focus and pay attention to the lawyers during the two-day trial, were often unresponsive to questions, and needed frequent breaks.

Iblauk, wearing a baggy prison-issued blue tee shirt, smiled when he was escorted out of the courtroom and back into police custody after Tulloch dropped the charges.

Iblauk has been in pretrial custody for two and a half years following his arrest.

Tulloch said she will give specific reasons April 24 on why she dismissed Iblauk’s charges.

She will give a verdict on Iblauk’s first trial then, too.

That trial, which deal with allegations that Iblauk sexually assaulted an eight-year-old girl, wrapped up April 15, when Tulloch reserved judgment.