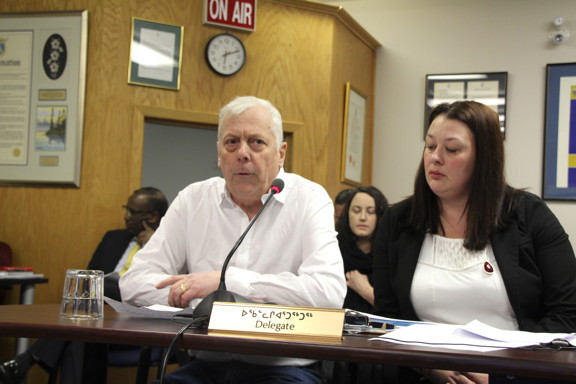 NunaVet’s Duncan and Leia Cunningham tell councillors Jan. 23 that free clinics offered by the Iqaluit Humane Society are contributing to the potential bankruptcy of their business. (PHOTO BY BETH BROWN)

A free vet clinic planned next week by the Iqaluit Humane Society, and events like it, could threaten the stability of Nunavut’s only permanent veterinary service, say staff at the privately owned NunaVet Animal Hospital.

Iqaluit veterinarian Leia Cunningham and clinic manager Duncan Cunningham told city councillors on Tuesday, Jan. 23 that the municipality is allowing the non-profit shelter to compete with an Inuit-owned business by providing a building and amenities to the Iqaluit Humane Society at no cost.

The Iqaluit Humane Society announced on Facebook that it will bring two vets and two vet techs to the Nunavut capital Jan. 29 to Feb. 2.

Society president Janelle Kennedy said there are around 80 low-income families waiting for vet services they could not otherwise afford.

The free clinics, organized through third-party funding applied for by the humane society, are to offer dog and cat spay and neuter surgeries, as well as vaccinations, consultations, nail trims and grooming.

Since many southern vets are willing to bring their skills to the north for free, and donors are able to chip in with flight points, the clinics were “an option to do more with less,” she said. “Paying full price is not sustainable for us.”

But NunaVet told the humane society board, in a letter also provided to councillors, that the business has suffered cancelled appointments since the free clinics were announced.

“I believe the city has the authority to tell its free tenant not to compete with local business,” Duncan Cunningham said. “It is our hope that council will understand that they are providing an unfair advantage to the IHS.”

Duncan told council he believes the situation is in contravention of Article 24 of the Nunavut Agreement, an article that supports Inuit-owned companies.

“This is a backwards step in economic development,” he said.

Mayor Madeleine Redfern said the city has no part in the organization of the free clinics, nor are the clinics to be run on city premises.

The NunaVet Animal Hospital became a full-time business in 2015. But in 2016, when IHS ran a free clinic, the organization took a hit financially.

IHS later ran two spay and neuter clinics in partnership with NunaVet, where the shelter raised funds and then paid NunaVet the full price, an amount of around $12,000.

“Unfortunately this year they have decided to go ahead with another free clinic,” Leia Cunningham said. “This can’t continue happening. I cannot compete with free.”

The Inuk veterinarian, who is from Iqaluit, said she volunteered with the Iqaluit Rotary Club for 14 years, when the group would bring a vet to town twice each year.

After completing many years of university and veterinarian schooling in the South, she came back to Iqaluit to open the first vet clinic in the territory. She said this endeavour has left her over a million dollars in debt.

“It’s not just five days this year, it’s people not coming to my clinic, with the expectation that there will be free services from the humane society,” Leia Cunningham said. “I have worked my life for this company, I cannot watch it go under because the city is helping a society that is directly competing with me.”

NunaVet said it is hoping to expand to other Nunavut communities and to bring in a second veterinarian in the spring, but can only do so if people are paying their vet bills.

“We are perilously close to bankruptcy and we are not able to compete with you. Your not-for-profit organization is putting veterinary care at risk for all of Nunavut,” Duncan Cunningham wrote in his letter to the IHS board. “We have not yet had a profitable year, and this trend has to change.”

The same letter notes that the clinic previously offered the animal shelter a 15-per-cent discount on services, but removed the discount when payments were not made on time.

In 10 years of operation, the Iqaluit Humane Society has rescued and found homes for around 7,500 animals. The shelter said it encourages its Iqaluit clients to take their new pets to NunaVet for veterinarian care.

During the council meeting, IHS said it does not want to go back to a time when there was no vet in Iqaluit.

At the same time, Kennedy told councillors that the shelter is just doing what humane societies everywhere do.

“Free clinics are a standard practice across North America. Nunavut should be no exception,” she said, adding the clinics were especially important given the economic realities of the north.

The humane society considers itself to be a primary client of NunaVet, having spent around $31,160 on Iqaluit vet bills in 2015 alone.

“We would like to see NunaVet profitable and thriving,” Kennedy said. But she also said “we should be able to coexist and neither suffer for it.”

The IHS also questioned NunaVet’s capacity to provide the number of vet services that the upcoming clinic could.

A slide presented by Kennedy to council stated: “In December 2017, we asked if we could have one animal fixed. We were told in writing by email that NunaVet was booked until March 2018.”

Redfern acknowledged the value that both organizations bring to the residents of Iqaluit.

She said the humane society’s efforts to control the animal populations in Iqaluit through spay and neuter clinics help to reduce the strain placed on municipal resources when stray animals become a public safety issue.

“We do have animal over-population in the community,” she said.

As for the animal hospital, the Iqaluit’s economic development office will work with NunaVet to find ways of supporting the local business.

“We want you to succeed,” Redfern told NunaVet. 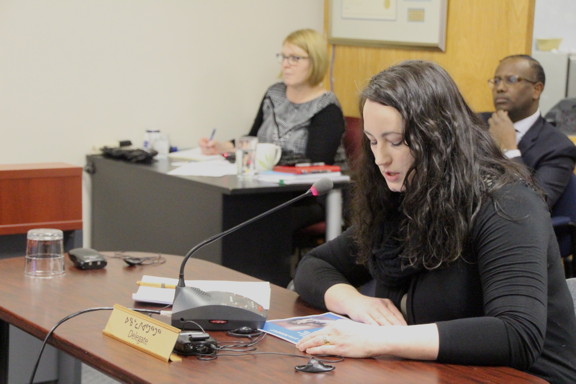 Janelle Kennedy, president of the Iqaluit Humane Society, says the charity can’t fundraise the full cost for NunaVet to offer vet care to the 80 pets being seen by southern vets for free next week. (PHOTO BY BETH BROWN)