“If you look at Iqaluit, nothing’s changed since the time of Martin Frobisher” 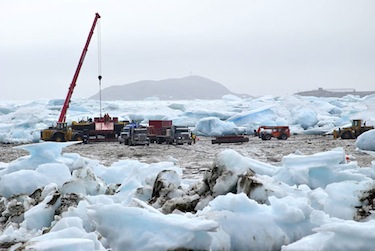 A shipping company’s costly nightmare: heavy sea ice clogs the waters of Frobisher Bay this past August, forcing workers to use heavy equipment to clear a path through the ice to this barge bringing in goods. (FILE PHOTO)

The heads of the three largest shipping companies working in Nunavut converged at the Nunavut Trade Show Sept. 27 where they all criticized Nunavut’s severe lack of basic marine infrastructure.

Nunavut communities, and especially Iqaluit, fall behind communities in Nunavik because of the near total absence of port facilities in the territory.

“If you look at Iqaluit, nothing’s changed since the time of Martin Frobisher. Nothing at all,” Paquin told an audience of about 60 people at the trade show session on “Infrastructure Transportation/Deep Sea Port.”

“I focus on Iqaluit because this is the largest community, and it’s one of the communities that we lose the most time. Time equals money — these ships are expensive, they’re expensive to run, and here we are, waiting,” she said.

Ships can only unload cargo in Iqaluit eight hours a day when the tide is out, but their workers are helpless and forced to wait once the tide comes back in, he said.

And icebergs blocking the way to shore only create more problems, as seen in this year’s disastrous shipping season.

“It takes two weeks here — whereas if they were doing it in Montreal, it would take two days,” Woodward said.

Woodward suggested building a small port, such the old causeway port built in the 1950s that was later destroyed slowly by ice and by wear and tear.

“If you can rebuild that former American dock out there, to accommodate tides, we can have weekly shipments from Montreal,” Woodward said, adding that a rail system at the port would help roll cargo on and off the ship quickly and efficiently.

Woodward would favour shipping from Goose Bay’s port in Labrador, which he says is being “underutilized” at the moment. That means a shipment of perishable foods could be driven from Montreal to Goose Bay in two days, and then shipped 1,340 kilometres to Iqaluit, which takes three days.

This, he says, will lower the cost of food prices in Iqaluit, and perhaps even other communities in the future.

“We’re looking at about a 30 per cent savings on perishables rather than flying them,” he said.

Paquin suggested that smaller ports are more realistic in Nunavut communities, such as those found in all Nunavik communities.

Fourteen communities in Nunavik benefitted from an $88-million federally funded marine infrastructure program, where basic docks, ramps and roads were built in the 1990s.

Paquin said she’s been lobbying Transport Canada and the Government of Nunavut about the need for similar infrastructure since 2008. She also made a pitch to the City of Iqaluit for a phase-in project, that would see new infrastructure at the causeway that could serve as a landing facility for tugs and barges.

In 2010 a push for a deep-sea port spawned numerous designs and options, but all turned out to be too expensive, ranging from $65-to $73-million.

Prior to that, the GN dismissed an idea to create a $50-million harbour several years ago, after the City of Iqaluit commissioned the plan.

“It’s been a topic that needs to be raised. I think we’ve been dealing with this for a number of years. I think the priorities may not have been there. I think it’s time to bring it up again,” Paquin said.