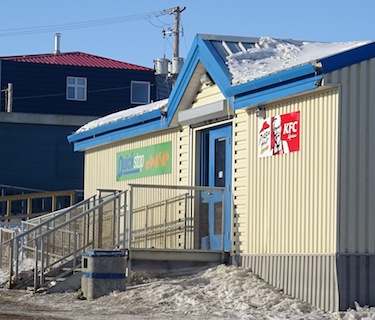 Justice Paul Bychok sentenced Michael Cooper-Flaherty to five years in prison for masterminding a series of robberies in Iqaluit in 2014 and 2015—minus time-and-a-half served for remand custody in Ontario and Nunavut. Bychok gave Cooper-Flaherty “enhanced credit” for his custody time because of a litany of “institutional failures” the man suffered at the hands of correctional authorities. As a result, Cooper-Flaherty will serve only another 589 days in prison. (FILE PHOTO)

The young Inuit man who coerced a group of teenagers into a committing a chain of robberies around Iqaluit two years ago has been sentenced to five years in jail, in a court decision that condemns southern correctional faculties, and Nunavut, for their “shameful” treatment of the accused.

Michael Cooper-Flaherty, 20, wore a blue prison-issued tracksuit and quietly nodded to Justice Paul Bychok that he understood his sentence, delivered at the Nunavut Court of Justice in Iqaluit, July 11.

“Canada’s 150th anniversary provides an opportunity for all of us to take stock of how far we still must go in building a fair and truly compassionate society.”

Cooper-Flaherty pleaded guilty to multiple charges stemming from five robberies in Iqaluit, between late 2014 and 2015, when he pressured several local minors to rob various businesses around the city.

In two of those robberies, he supplied a .22 caliber rifle to two 15-year-olds who then held-up Iqaluit’s Quickstop convenience store on April 6, and again on April 12.

Cooper-Flaherty will serve about a year and a half of the five-year sentence after Bychok credited 1,236 days already served—with enhanced credit—from his time spent in custody awaiting his sentence.

“Serious crimes must have serious consequences,” Bychok told the court, but then he itemized the shoddy treatment the prisoner had already received in custody.

Expert submissions to the court diagnosed Cooper-Flaherty with post-traumatic stress disorder, obsessive-compulsive disorder, substance addiction and clinical depression. But Cooper-Flaherty was only ever given one course on “alternatives to violence” during the entirety of his time in remand, despite repeated requests for assistance, Bychok said.

He was also subjected to systemic institutional lockdowns and cell confinement, while at the two southern facilities, which restricted his access to food, showers, fresh air and recreation for a total of 158 days.

Baffin Correctional Centre administrators “ignored requests” by Cooper-Flaherty’s defence lawyer who asked for the number of occasions his client was subjected to lockdowns at that facility during the 377 days spent there, Bychok noted.

“I am troubled and dismayed by Mr. Cooper-Flaherty’s corrections history,” he said, adding, “he asked for more psychiatric help, which never came.”

“This case is yet another shameful example of how we failed to offer meaningful help to those of our fellow citizens who are most in need.”

Bychok noted the “deplorable physical conditions” reported at the OCDC, which was also mentioned in a recent provincial review of Ontario’s corrections system.

“Of his two-year remand, he spent almost one year and a half of his most formative years in the South, where he was isolated and alone.”

Bychok said removing Cooper-Flaherty again from Nunavut would be a “grave injustice” and recommended “in the strongest possible language” that he serve what remains of his sentence at the Rankin Inlet Healing Facility.

“Every effort should and must be made to get you the counseling and mental health treatment you require.”

Nunavut, Bychok said, is in “a crisis,” can’t effectively rehabilitate its offenders, and does not provide the necessary tools for repeat offenders in Nunavut to break out of the cycle within which they are trapped.

“We see scores of these offenders in court, over and over again,” he said.

“Anyone who doubts this territory is in crisis should travel with this court. The needs are immediate, the pain and suffering is real, but the sad reality is, very few, if any, offenders are ever rehabilitated the way things are now.”

During sentencing, the court imposed a 10-year firearms ban on Cooper-Flaherty, and his DNA will be added to the national offenders database.

Bychok also ordered the court clerk to forward complaints Cooper-Flaherty had made about his treatment at BCC, along with a psychiatric evaluation report, to the facility’s warden.