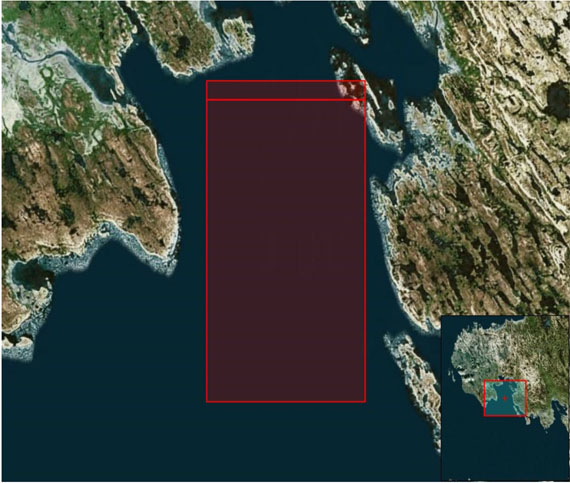 The area for the proposed National Historic Site takes spans a 55-square kilometre area inside Terror Bay and, if approved, will restrict access to individuals entering the area. (IMAGE COURTESY OF PARKS CANADA)

The final resting place of Sir John Franklin’s ship, the HMS Terror, along with a large section of the bay where it was discovered last year, will become part of an existing National Historic Site proposal, according to documents recently filed by Parks Canada with the Nunavut Impact Review Board.

In a documents posted on the NIRB’s website dated July 21, Parks Canada laid out the framework for incorporating the HMS Terror site, in King William Island’s Terror Bay, into its already existing proposal to create a Wrecks of HMS Erebus and HMS Terror National Historic Site of Canada.

The area covers roughly 55 square kilometres inside Terror Bay and, if approved, would restrict access to the area.

But under the Nunavut Land Claims Agreement, the new designation would not affect the right of Inuit to from enter the historic site area for harvesting.

The federal government designated the Terror and the Erebus wrecks as national historic sites in 1992, long before the location of either ship was known.

In 2015, Parks Canada quietly pushed through a 10-square-km area around the wreck of the Erebus in the Queen Maud Gulf, south of King William Island, after divers discovered it there in 2014.

The move was characterized as underhanded by Inuit organizations and the Government of Nunavut, who felt at the time they were cut out of the management of the wreck.

What followed was a series of skirmishes over rights to the site and the artifacts it holds, culminating in federal divers being denied permits to explore the Erebus in 2015 and again in 2016 if Parks Canada didn’t agree to joint-ownership of any discovered relics.

Under Article 33 of the NCLA, archeological artifacts found within the Nunavut settlement area are owned jointly by Inuit and by government.

This time around, things seem to be going smoother, despite ongoing controversies over the legality of the Terror’s discovery in September 2016.

Parks Canada’s NIRB submissions came with support from the Kitikmeot Inuit Association, the Hamlet of Gjoa Haven and the “Franklin Interim Advisory Committee,” a group established in 2016 to manage the wrecks ahead of an Inuit Impact Benefit Agreement, or IIBA, to be negotiated between the KitIA and Parks Canada.

“Amending the National Historic Sites of Canada Order to include the wreck of the HMS Terror has received strong support form the Interim Committee and is seen as the most effective way to ensure the site’s protection and preservation,” Parks Canada said in its submission.

In a letter dated Feb. 27, the Kitikmeot Inuit Association said it would move forward by negotiating a single IIBA for both sites, but added “we expect the agreement to reflect the expanded geological scope of the [national historic site] and the historical and cultural importance of these sites.”

While negotiations for the IIBA are still ongoing, the KIA confirmed to Nunatsiaq News, July 28, that the next round of meetings is scheduled for September.

Along with endorsing the Parks Canada application, the interim Franklin committee also said it is working with the Gjoa Haven hunters and trappers association to establish two camps sites near each wreck as part of a “Guardian program.”

“The guardians at each site will enjoy traditional activities on the land, present the Franklin story to visitors, and contribute to site protection and monitoring,” Parks Canada’s NIRB submission said.

The latest Parks Canada expedition to investigate the Franklin wrecks is scheduled for later this summer, but since their main research ship is in dry dock in Vancouver receiving repairs, their work this year will be scaled back.