Betty Atighioyak, 32, waited hours for a medevac to Edmonton on Dec. 8 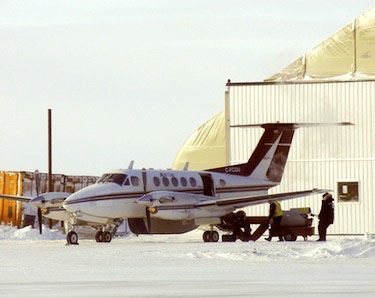 Yellowknife-based Air Tindi, which handles all flight operations for Aqsaqniq Airways Ltd., which now holds the Government of Nunavut medevac contract for the Kitikmeot region, readies a King Air for a flight out of Cambridge Bay. (PHOTO BY JANE GEORGE)

A Cambridge Bay man says his beloved common-law wife might still be alive today if she’d had a more speedy medical evacuation to Edmonton last December.

It took nearly 12 hours for Betty Atighioyak, 32, to reach a hospital bed 1,970 kilometres away in Edmonton on Dec. 8, said Leonard Epilon.

Around midnight on Dec. 8, Epilon heard his wife get out of bed.

“Then I heard her fall down,” he said.

Getting out of bed to check what happened, Epilon found her having a seizure on the floor of his home’s bathroom, he told Nunatsiaq News on Feb. 28.

After Atighioyak arrived by ambulance at the Kitikmeot Health Centre, medical staff decided to keep her there for observation, he said.

And, after an hour, a nurse called Epilon, who returned home to stay with their two youngest children, aged seven and 11 years, and told him to come back to the centre.

Epilon learned his common-law wife had likely suffered a stroke and that he should return to the centre with some clothing, so she could be medevaced out for specialized medical care in Edmonton.

At 2 a.m., health workers were still trying to schedule a medevac, and Epilon remembers hearing them say it would take “so long” — that is, until about 4 a.m. for an aircraft to arrive.

The medevac was one of the first operated under the Aqsaqniq Airways Ltd. air ambulance Government of Nunavut contract for the Kitikmeot region, a contract which had previously been held by Adlair Aviation Ltd..

“If Adlair had been here, Adlair would have been out of here in 15 minutes,” they said, Epilon recalled.

But Adlair flew its last medevac flight Nov. 30 after losing the contract to Asaqniq, and couldn’t use its ambulance-equipped Learjet or other aircraft stationed in Cambridge Bay to move Atighioyak more quickly to Edmonton.

While he waited with Atighioyak, Epilon sat holding her hand and talking to her.

Atighioyak ended up leaving Cambridge Bay at 5:30 a.m., and, after a stop in Yellowknife, didn’t arrive in Edmonton until sometime after noon.

The doctor told Epilon that he should leave for Edmonton as soon as possible, and that Atighioyak was unresponsive.

She died the day Epilon finally arrived at the hospital in Edmonton, on Dec. 13.

Just days before her death, Yellowknife-based Air Tindi, which handles all flight operations for Aqsaqniq, said a dedicated, medevac purpose-built Learjet 35A would be based in Cambridge Bay.

Today, Epilon says he’s now angry that the Learjet which Aqsaqniq publicly promised to use for medevacs in the Kitikmeot still hasn’t arrived in Cambridge Bay.

The lack of a Learjet for use during medevacs in the Kitikmeot also surfaced in the Nunavut legislature during Feb. 27’s question period, when Nattilik MLA Jeannie Ugyuk wanted Health Minister Keith Peterson to explain why “the new company does not have a fast plane.”

Peterson, who is also the MLA for Cambridge Bay, said “as I recall the RFP [request for proposals] that was issued last year called for that Aqsaqniq Airways put in a Learjet positioning in Cambridge Bay with a hangar with two backup King Airs in Yellowknife.”

“My latest information is that a Learjet is part of the contract is in Ontario and waiting…and at some point will be repositioned in Cambridge Bay,” Peterson said, urging anyone with concerns about the medevac services to let the regional office know “and they will investigate.”

Peterson also said Feb. 27 that he plans to conduct a full review of the Request For Proposals process “to ensure and reassure myself that everything that we take to be important in future contracts, future RFPs, when those contracts come up for renewal…that all the safety requirements are taken into consideration.”

After mourning Atighioyak over the holidays and into the new year, Epilon now plans to seek legal advice on whether there was negligence involved in the death of his common-law wife.