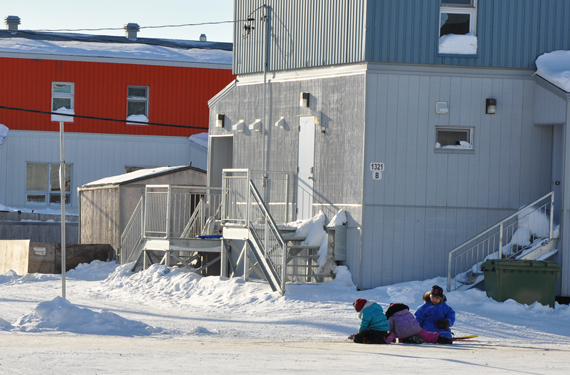 Saqijuq is a project under Nunavik’s Regional Partnership Committee, which has a mandate to restore social peace, keep adults out of jail and give Nunavimmiut children safer, healthier lives. (PHOTO BY SARAH ROGERS)

KUUJJUAQ — Nunavik’s Regional Partnership Committee is moving ahead with a project to combat drug and alcohol use, with the goal of keeping Nunavimmiut out of jail and in good health.

Saqijuq, which means a change in the wind’s direction, would use community intervention to prevent some Nunavimmiut struggling with addiction from going through the prison system.

A Nunavik-Quebec table that oversees Saqijuq signed off on the project at a recent meeting in Quebec City, said Regional Partnership Committee president Minnie Grey.

That group, made up of representatives from the health, public safety and justice sectors in both Nunavik and Quebec, will have to submit its first report by the end of June 2014.

The challenge Saqijuq plans to tackle, as Grey explains it: Nunavik sees a high number of crimes that are fueled by alcohol, and incarceration is not solving the problem.

“We see a lot of addiction, and these people that have problems with alcohol abuse are ending up in jail,” she told the Kativik Regional Government’s regional council meeting Feb. 26. “We want to help these people before that happens.”

Saqijuq’s goal is also to reduce the physical and psychological impacts that substance abuse has on families and the larger community.

As part of the project, Grey has suggested developing “sobering centres” where community intervention teams could meet with offenders.

“Intervention teams in the community could meet with that person when they sober up and go over their options, offer them alternatives,” Grey said.

Full details of the plan should be made public by the summer, Grey said.

In the meantime, the Kativik Regional Police Force is taking a leading role — Sgt. Sammy Snowball and crime prevention officer Lizzie Aloupa will help map out the plan.

Saqijuq is expected to be rolled out in two communities first; one large — Puvirnituq — and another small — Kangirsuk.

Marois and her minister of social services, Véronique Hivon, say they are committed to helping the region find “concrete solutions” to its social problems.

Saqijuq is one of a number of projects under Nunavik’s Regional Partnership Committee, which has a mandate to restore social peace, keep adults out of jail and give Nunavimmiut children safer, healthier lives.

Saqijuq is being funded through Nunavik’s Ungaluk Safer Communities program for its first year; Nunavik officials have told Quebec they’ll be looking for longer-term support.