“I knew this was going to be more of a straight-people party, looking to see a man in a dress” 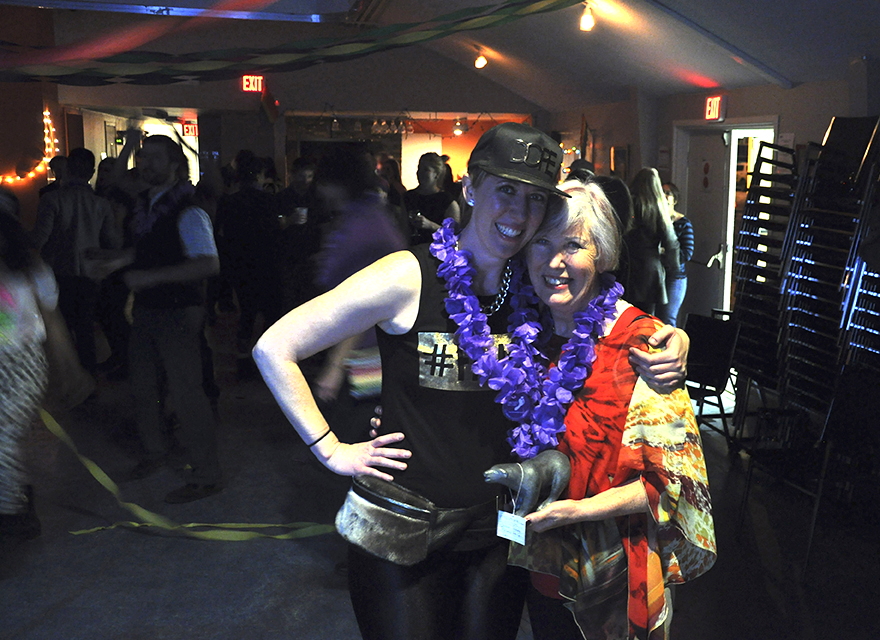 Pride parties celebrate the diversity of sexual and gender identity and have been held in communities around the world for decades, but the event that unfolded in Iqaluit Sept. 27 could only have happened in Iqaluit.

“We have been in this place for a very, very long time,” Laakkuluk Williamson-Bathory, who performed the mask dance, said to the capacity crowd and those who could hear in the line extending out the door. “And of course we have all sorts of people that have come and joined us in this Arctic land.”

Iqaluit Pride’s first annual party to shine a light on lesbian, gay, bisexual, transgender and queer — or LGBTQ — issues started in the dark as a 20-minute power outage greeted the first guests.

But by the time throat-singers Celina Kalluk and Marie Belleau opened the party, the spotlights were shining and the audience, eager.

“We’re going to start with a love song because that’s what we’re here to celebrate too,” Belleau said. “So close your eyes and we’re going to take you to different places.”

Next, Williamson-Bathory took to the stage and recounted an Inuit myth about the origin of the sun and the moon — a story about love, lust and long dark winters. Audience members seemed to hang on every word. Some laughed nervously.

Williamson-Bathory was just warming up, though. She invited Belleau and Kalluk to sing while she got into costume for the mask dance which is based on a Greenlandic tradition.

Her face painted in a mask of red, black and white, she wore a black jumper stretched tightly over her round, pregnant stomach. A long bushy tail trailed behind her and, at one point she shouted “Fuck PETA!”, to the delight of the audience, and in tribute to Tanya Tagaq’s controversial acceptance speech at the 2014 Polaris Prize music award gala Sept. 23.

Then Williamson-Bathory prowled through the audience to look for partners, playmates and even victims for her dance.

Zsa Zsa LaWhore hosted a lip syncing contest with audience participation for the final performance of the night.

“Anyone else find it ironic that every one of these performers is straight?” she asked with a laugh after the three contestants performed. “And I don’t think any one of them knew any of the words to any of the songs.”

But the audience didn’t seem to mind as they cheered and danced with the contestants.

All performers donated their talents to the cause of Iqaluit Pride’s party and the audience showed their appreciation with hoots and hollers.

Pride events began in the 1960s and 1970s in large North American urban centres in response to oppression felt by the LGBTQ community.

But Gerry Delaney, who performs as Zsa Zsa LaWhore, told Nunatsiaq News that times have changed.

“At one point ‘pride’ used to be specifically for the LGBTQ community, but I think now it’s more of a pride in everybody, for everybody,” Delaney said.

“I knew this was going to be more of a straight-people party, looking to see a man in a dress,” she said when she saw the number of hands. “But thank you for your support.”

Zakrison told Nunatsiaq News in an interview Sept. 21 that funds raised from the event would go towards organizing future Iqaluit Pride efforts, including family-friendly events and reaching out to youth.