Some NTEP grads “prefer to teach in English:” Nunavut minister 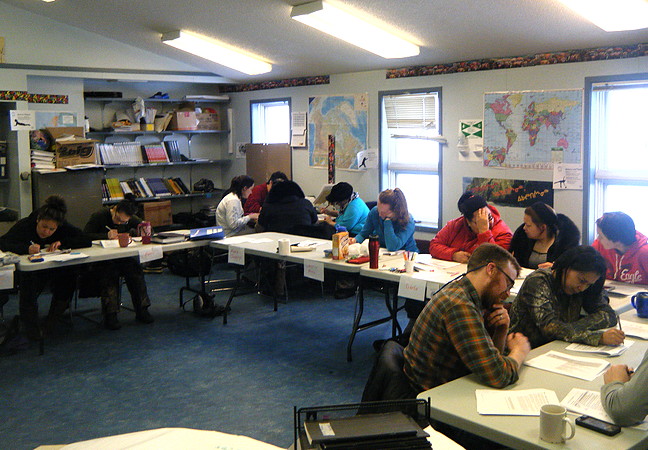 NTEP students in Arviat participate in a coach certification training with some practicing teachers and some Grade 12 students in February 2016. Education Minister Paul Quassa said Feb. 23 that a review of NTEP that involves the University of Regina, Nunavut Arctic College and the Department of Education will be completed by the end of this year. After that, they will likely launch a new or revamped program, Quassa said. (FILE PHOTO)

Some graduates of the Nunavut Teacher Education Program “prefer to teach in English,” and that’s one reason the Government of Nunavut is now reviewing it, Education Minister Paul Quassa said Feb. 23 in the Nunavut legislative assembly.

The GN first promised that NTEP review in 2013, in its response to the Auditor General of Canada’s report that year on the Nunavut education department. The AG’s office found the GN wasn’t even coming close to its goal of creating a bilingual K-12 school system by 2020.

In response to questions from South Baffin MLA David Joanasie, Quassa said the review, which involves the University of Regina, Nunavut Arctic College and the Department of Education, will likely be completed by the end of this year.

“We started that review because we found that there were graduates from that program who prefer to teach in English,” Quassa said.

“For that reason, we wanted to do a review and revamp the program so that NTEP students would be able to teach their students using Inuktitut and to make sure that the students are proud of speaking Inuktitut.”

The University of Regina has since 2007 accredited Bachelor of Education degrees offered through NTEP.

But the program predates the creation of Nunavut by many years. It started up in 1979, when it was called the Eastern Arctic Teacher Education Program. The program was later absorbed into Arctic College and after 1999, became known as NTEP.

Throughout its 38-year history, it’s been a vital tool for training Inuit language educators, but Quassa said NTEP now needs to be renewed.

“We will be looking at a new program possibly at the very end of this year and that is Inuktitut-speaking teachers specific,” Quassa said.

Joanasie posed those questions to Quassa on the same day that Aluki Kotierk, the president of Nunavut Tunngavik Inc., issued a blistering statement that slammed the GN for not spending more on Inuit language education in its 2017-18 budget.

“This is appalling. The erosion of Inuktut and Nunavut’s education system will continue under this government. I truly expected to see a budget that contained major investments in Inuit teachers and Inuktut curricula,” Kotierk said.

But Kotierk said that’s not enough.

“The minister of finance states that education is their top priority, yet the Government of Nunavut’s proposed budget will not significantly increase the number of available Inuit educators nor will it increase the amount of Inuktut language instruction,” Kotierk said.

It’s still not clear how many more Inuit language teachers are actually required to meet the GN’s lofty aspirations.

About 10 years ago, NTI’s 2007 annual report on social development in the territory estimated that Nunavut then needed more than 400 more new educators to offer Inuit language instruction from K-12.

The GN’s December 2016 Inuit Employment Report shows that 667.5 full-time professional jobs are filled at the education department. Of those, only 181.5 are filled by Nunavut Inuit—about 27 per cent of the total number of professional employees.

Only six per cent of senior managers and 17 per cent of middle managers in the education department are Nunavut Inuit, but at lower levels, Inuit employment is high: 92 per cent of administrative support workers and 91 per cent of paraprofessionals.

Quassa said, however, that the GN will continue to work towards more Inuit employment, including employing more Inuit teachers.

“We would like to see an increase in Inuit employment within the government and that includes Nunavut Inuit teachers,” Quassa said.