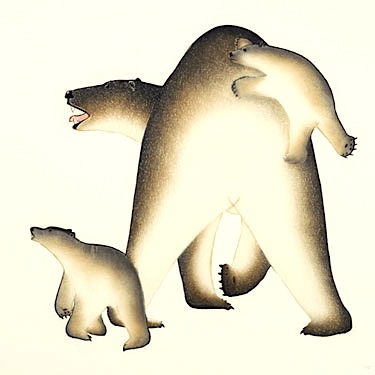 Kananginak Pootoogook’s “Over the Horizon” is one of six of the late artist’s prints on exhibition and sale at the Nunatta Sunakkutaangit museum this month. This print, using etching and aquatint, carries a price of $600, with prints in the 2011 collection selling from $350 to $2,000. (PHOTO COURTESY OF DORSET FINE ARTS)

When the Cape Dorset annual print collection opened Oct. 22 in Iqaluit, dozens of art fans and collectors turned out at the Nunatta Sunakkutaangit museum.

The artists include Kenojuak Ashevak, 84, whose prints, on display in museums and collections around the world, have been reproduced on Canadian stamps, alongside younger artists like Ningeokuluk Teevee, 48, whose first children’s book, Alego, was short-listed for the Governor General’s Literary Award in 2009 for children’s illustration. and Shuvinai Ashoona, 50, the daughter of Cape Dorset artists Kiuga Ashoona and Sorosilutu.

The collection also features the last prints of one of Cape Dorset’s most famous artists: Kananginak Pootoogook, who passed away in November 2010 at 75 and to whom the collection is dedicated.

Dubbed by southerners as the “Audubon of the North,” a reference to the famed American wildlife artist, John James Audobon, Pootoogook was known for his drawings of Arctic wildlife, especially birds.

Many say Pootoogook had a photographic memory, which he used to recall images of a youth spent living on the land on southern Baffin Island in the 1940s and 1950s.

Before his death, Pootoogook was the last of the original printmakers from Cape Dorset’s West Baffin Eskimo Co-op, home of the renowned Kinngait graphic arts studio.

The co-op, along with its Toronto-based marketing office, Dorset Fine Arts, has launched an annual collection featuring its artists every year since 1959, “quite a history,” said its manager and curator, Brian Lunger.

For its part, Nunatta Sunakkutaangit has hosted the collection every year since the mid-1980s.

This year’s collection offers plenty of variety, Lunger said, adding that its artists span the generations, ranging between 30 and 80 years of age.

“But there’s something distinctly Cape Dorset in their look and style,” he said. “You wouldn’t mistake them from somewhere else.”

Because the prints are in such high demand, interested buyers entered their name in a draw to purchase prints Oct. 22.

Although many of the prints have already been sold, people still have time to view the prints, which remain on display at the Iqaluit museum until Dec. 4.