“Results highlight the importance of education” 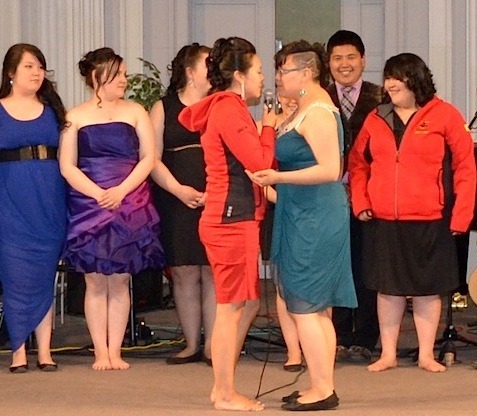 Canadian Inuit women continue to play catch-up with other Aboriginal women in Canada.

That’s among the many conclusions from a recently-released chapter on First Nations, Métis and Inuit Women contained in a Statistics Canada study on women in Canada.

Here’s some good news from the study: Inuit women, who live in the Inuit Nunangat regions, engage in more traditional activities than other Aboriginal Canadians and remain more likely to speak their Aboriginal language — Inuktut.

An Inuk woman with a university degree living in Inuit Nunangat can look forward to earning an average salary of $95,058, according to the study, based on data from the 2011 National Household Survey and the Aboriginal Peoples Survey.

“These results highlight the importance of education, especially as Aboriginal women are generally less likely than non-Aboriginal women to have a postsecondary qualification,” StatsCan said.

In 2011, the proportion of Inuit women who held a high school diploma or equivalent as their highest qualification remained the lowest of any Aboriginal group: 17 per cent — or less than one in five — for Inuit women aged 25 to 64, compared to 25 per cent for Métis women and 23 per cent for First Nations women.

The study shows how the living conditions of Inuit women lag behind First Nations and Métis women: Inuit women are the youngest overall of any Aboriginal group, they have more children, are likely not legally married, live in overcrowded substandard houses and often drop out of school due to pregnancies, child caring or other responsibilities.

As well, the study says nearly one in three Inuit women had contemplated suicide in the previous 12 months, two in three were daily smokers, and more than one in three reported heavy drinking.

Roughly one in four Inuit women over 15 years old, living in Inuit Nunangat, also said they lived with a chronic health condition:

• about nine per cent were diagnosed with asthma; and,

The largest proportion of Inuit women live in Nunavut (45 per cent).

Outside Inuit Nunangat, in 2011, the largest female Inuit population could be found in Ottawa-Gatineau, with 550 Inuit women and girls, followed by Edmonton with 535, and 445 in Yellowknife.

But the proportion of Inuit women and girls living in Inuit Nunangat has declined since 2006, the study said.