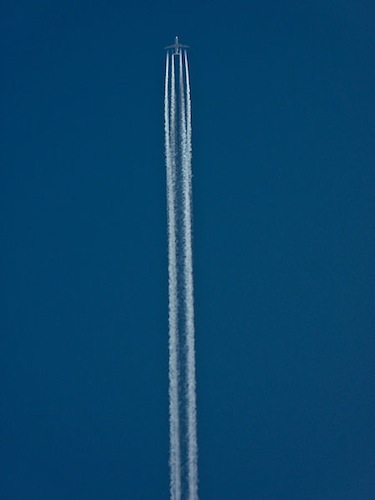 Limiting air traffic over the Arctic could help curb warming in the region, suggests a new study. (FILE PHOTO)

Here’s a way to keep the Arctic cold: prevent aircraft from taking shortcuts over the Arctic or only allow cross-polar flights during the dark months of winter.

A recent study in the scientific journal Climatic Change on the effects of rerouting aircraft around the Arctic circle on Arctic and global climate looked at what would happen if cross-polar flights by international commercial aircraft were rerouted away from the Arctic.

Its research determined that this rerouting would cut fuel-use emissions within the Arctic by 83 per cent.

And the rerouting would delay the transport of heat-increasing pollutants from other regions to the high latitudes.

The rerouting would particularly cut down on the tiny soot particles known as black carbon, said the study, which produced a 22-year model based on 2006 aircraft emissions.

Previous research has shown that the impact of soot is magnified from 10 to 100 times in the Arctic because the dark particles are magnets for heat on ice and snow.

Reducing this soot over 22 years by rerouting flights away from the Arctic would lead to decreased Arctic and global temperatures and increased Arctic sea ice, the study found.

But there’s a cost to this rerouting: it would increase worldwide fuel and operational costs by $99 million a year.

However, that cost, when balanced against the environmental and human health cost benefits of rerouting away from the Arctic, would result in huge savings, the study suggests.

If this rerouting can reduce global warming by 1.75 to two per cent, as the study found, 2025 global warming damage would cost $4.7 to $ 5.4 billion a year less in the United States alone.

The rerouting would also delay the elimination of annual Arctic sea ice cover, which may otherwise occur within 20 to 30 years, the study said.

Rerouting did appear to up temperatures just outside the Arctic circle, where aircraft emissions increased due to an increase in flights.

Although that “slight increase in total heat-increasing emissions due to rerouting may dampen the benefit of rerouting over more decades,” rerouting or even partial rerouting, such as allowing cross-polar flights during polar night only, may “delay the elimination of Arctic sea ice,” the study said.

Other studies have found airplane contrails or condensation trails — those lines you see high in the sky left from a jet’s passage — lead to the production of thicker heat-trapping clouds.

Cross-polar commercial flights became routine starting in 1998, when the Russian government gave permission for flights across its airspace, the study notes.

Since then, the number of cross-polar flights has gradually increased.

And cross-polar traffic is expected to grow further with increasing world trade and tourism.

Next May, when top ministers from eight circumpolar states meet at the Arctic Council ministerial meeting in Kiruna, Sweden, they’re expected to announce the creation of a task force to look at ways to reduce the emissions of black carbon.