Stories to help pass the time on your summer holidays 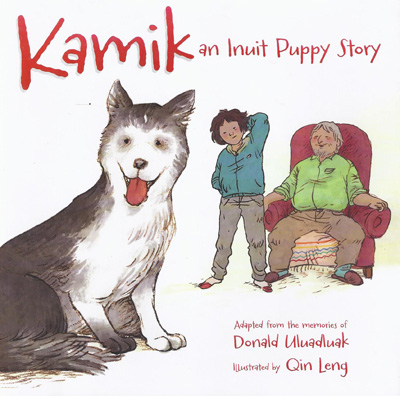 Kamik is the story of a young Inuk boy who learns about the role sled dogs have played in Inuit culture. (IMAGE COURTESY OF INHABIT MEDIA) 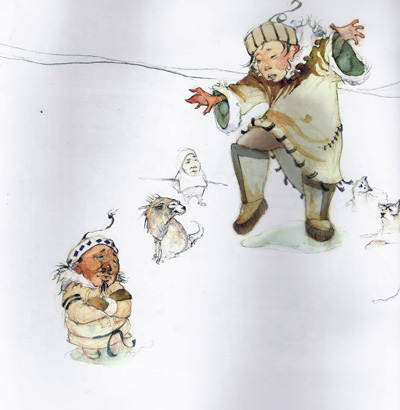 A scene from the book Ava and the Little Folk, illustrated by Iqaluit’s Jonathan Wright. (IMAGE COURTESY OF INHABIT MEDIA) 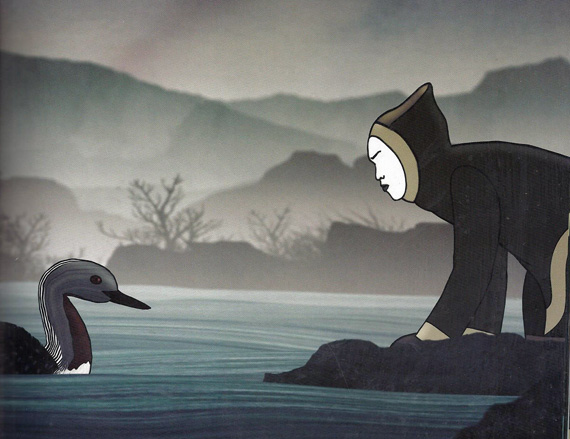 Published by Inhabit Media this year, the Blind Boy and the Loon is based on the National Film Board animation of the same story that Iqaluit’s Alethea Arnaquq-Baril directed in 2010. (IMAGE COURTESY OF INHABIT MEDIA)

School’s out for the summer, and children across Nunavut and Nunavik have some long and lazy days to look forward to.

Here are three books recently published by Nunavut’s Inhabit Media to read this summer. Each captures an Arctic legend or a slice of Inuit history, wrapped in colourful illustrations.

Jake is the young owner of a puppy named Kamik, the title of a new story written by Arviat elder Donald Uluadluak and illustrated by Qin Leng.

Jake’s grandfather tells him about raising sled dogs in his younger days and how his dog team helped him while he hunted and lived on the land.

Dogs are great navigators on the land, the grandfather tells Jake. They can sense dangers, such as other animals and thin ice.

Once, the dogs alerted Jake’s grandfather to a fire that broke out at camp during the night.

Another time, the dog team pulled Jake’s grandfather’s boat along the shoreline after the boat’s motor broke.

“In order to train a good dog, you have to build trust with the dog, living with it every day and teaching it through how you behave and how you treat it,” the grandfather said.

Listening to his grandfather’s stories, Jake begins to dream of travelling across the tundra pulled by Kamik and a team of dogs.

But Jake also sees the effort required to train a dog before he can do that.

Kamik is a good example of one of the many changes elder Inuit have seen in their lifetime, but it’s also a story that will connect with youth.

Kamik illustrates to young Inuit readers a part of their history, and offers a chance to engage in it.

If you travel through communities across Nunavut, there’s one common character you’re likely to hear about in each of the region’s storytelling: the little folk.

And those are the creatures featured in Inhabit Media’s award-winning book Ava and the Little Folk, the story of a young orphan who’s out visiting a Thule site on a cold winter day.

Ava thinks he’s alone, until the voice of a tiny hunter comes to him, and invites him to come hunting with him.

The dwarf-like man brings him to his tiny camp where Ava meets many other dwarf-like men and women, with their tiny dogs and igloos.

And soon, Ava helps harvest his first animal for the camp, earning the praise of the group.

For the first time in a long time, Ava enjoys warmth, shelter, food and companionship.

The book, published by Inhabit Media in 2012, has already garnered attention: Ava and the Little Folk picked up an Ontario Library Association Silver Birch Express Award honour this past spring.

Children from about age six to ten will enjoy this journey to an enchanted Arctic camp, brought to life with watercolour illustrations.

Ava and the Little Folk was written by Neil Christopher, and editor and founder of Inhabit Media, along with CBC journalist Alan Neal.

Another story common not only to Nunavut’s communities, but to Inuit regions around the world, is the story the Blind Boy and the Loon, or Lumaajuuq in Inuktitut.

In this adaption, Iqaluit artist Alethea Arnaquq-Baril writes and illustrates her own version of the tale, gathered from different versions she heard throughout her life.

A young blind boy discovers that his mother, in an act of revenge, caused him to lose his eye sight.

The story follows the boy’s journey to regain his sight, but then seek his own revenge.

Published by Inhabit Media this year, the Blind Boy and the Loon is based on the National Film Board animation of the same story Arnaquq directed in 2010, which went on to win best Canadian short film in the imagineNATIVE film festival.

“Lumaajuuq has taught me many lessons over the years, and as with any truly great story, the lessons I’ve taken from it have changed as I’ve grown older,” Arnaquq-Baril says in the book’s preface.

“…my hope is that the story will inspire other young Inuit to take interest and ask their own community members to teach them their version of this traditional story.”

You can order books directly from the publishing company and most online booksellers. Copies are also sold at Arctic Ventures in Iqaluit and in gift shops in other communities.