“You’re now ambassadors and will be when you go home” 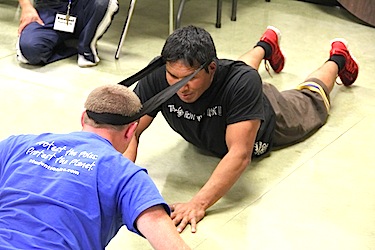 Johnny Issaluk demonstrates the head pull with a volunteer from the Students on Ice staff July 30, during a meet and greet at the Ukkivik residence with the students going on a 12-day educational cruise to Greenland. (PHOTO BY SAMANTHA DAWSON) 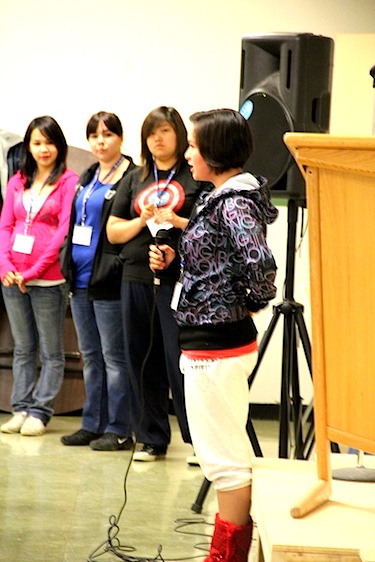 Youth participating in the 2012 Students on Ice trip line up to introduce themselves to the group July 30 at the Ukkivik residence in Iqaluit. (PHOTO BY SAMANTHA DAWSON) 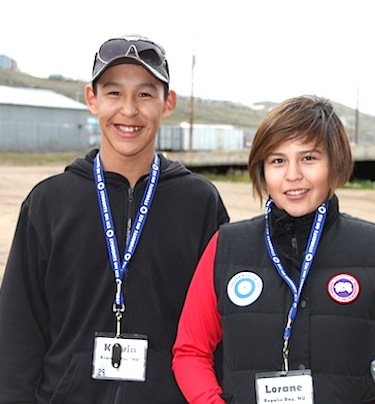 Kelvin Ivalutanar and Lorane Siusangark from Repulse Bay, shown here in Iqaluit on July 30, are among 25 youth from Canada’s Inuit regions who are going on the Students on Ice a 12-day educational cruise. (PHOTO BY SAMANTHA DAWSON)

On Aug. 1, 25 young people from Canada’s Inuit regions, along with 50 other students from around the world, will sail from Iqaluit to view icebergs and wildlife before heading from Qikiqtarjuaq to western Greenland.

That’s the plan for their 12-day educational cruise with the organization, Students on Ice.

During the journey, they’ll also explore the tundra during land trips and learn about whales, seals, walrus, caribou, Arctic hare, and climate change.

The youth, aged 14 to 18, will be accompanied by 43 Students on Ice staff members, who include scientists, aboriginal elders, historians, artists, writers, innovators, leaders and polar experts, as well as Iqaluit Mayor Madeleine Redfern and Mary Simon, the former president of Inuit Tapiriit Kanatami.

After setting off from Iqaluit, the first scheduled stop is at the Savage Islands near the southeastern tip of Baffin Island.

In Iqaluit on July 30 before the Students on Ice departure, Kelvin Ivalutanar, 16, of Repulse Bay, told Nunatsiaq News he’s looking forward to learning more about the Arctic environment and wildlife.

Ivalunatar said his teacher first suggested he might be interested in the trip, and so he applied to join the group, which offers scholarships to many participants.

His family is now “very happy” that he was accepted for the trip.

“I’m very excited to meet a lot of people and to make new friends,” Ivalunatar said of the students from all over Canada, the United States, India, Iceland, Germany and northern Russia.

Activities will include interpretive hikes, community visits, wildlife encounters, visits to Arctic communities and archeological sites, and a chance to acquire first-hand knowledge and insight into climate change.

“You’re now ambassadors and will be when you go home,” Students on Ice president and founder Geoff Green told the youth, who arrived in Iqaluit July 30.

“You’ll get friends from all over the world that will go on for a lifetime,” said Issaluk, adding, “I’m very happy you’re going and I wish I could go with you.”

Along for the trip as an educator, scientist David Gray plans to teach the kids about Arctic mammals such as muskox, Arctic hare and caribou in presentations on the ship.

An on-the-land workshop called “Skin and Bones” will show how every part of an animal can be used and not wasted.

Gray, who was been on eight other Students on Ice trips, said he’s interested in general ecology and how everything in nature “fits together.”

The combination of youth from different cultures is a good thing, he said.

“To the kids from the United States or California or Germany it’s all new. It’s a combination of teaching the whole thing to kids who have never experienced anything, incorporating the knowledge that the local kids have and helping it all come together.”

Fifteen-year-old Laura Ocean McLeod of Aklavik, this year’s ITK youth ambassador, also an avid photographer and camper, said “things are rapidly changing in the world, and we feel the effects of it up in the Arctic.”

“It’s necessary for me to learn about the place I live. I want to effectively communicate to the people of Aklavik and population of the Beaufort Delta that we can and do make a difference,” she told Nunatsiaq News.

Since 2000, more than 1,800 high school and university students from 40 countries have visited the polar regions with the Students on Ice program.

The students will be keeping daily blog journals and journalists on the ship will be posting content on the Students on Ice website.