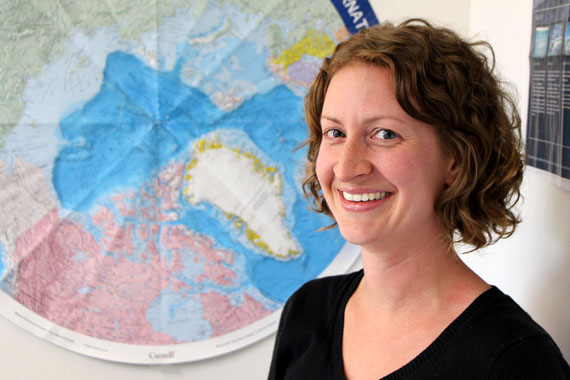 Melissa McKinney, a researcher at the University of Windsor, received a $70,000 Banting Fellowship grant for a study that will investigate whether climate change is leading to increased levels of contaminants like mercury and PCBs in country food. (PHOTO COURTESY OF MELISSA MCKINNEY)

If you live in the North and love eating seal and beluga, but wonder whether they contain harmful contaminants, a new research project may offer more knowledge.

That’s because this new, well-funded study plans to look at whether climate change is increasing levels of contaminants in ringed seals and beluga whales.

Melissa McKinney, a researcher at the University of Windsor, received a big boost in funding recently from the federal government, in the form of a Banting Fellowship.

The Banting Fellowship, worth $70,000 per year, is awarded for two consecutive years by three federal granting agencies to postdoctoral researchers who do health research, social research or research in the natural sciences, the fellowship’s website says.

McKinney told Nunatsiaq News Aug. 21 that, because of climate change, she believes smaller fish usually found further south — such as capelin, herring and sandlance — are swimming further north, where they are then eaten by seals and whales.

However, fish normally found south of the Arctic generally have higher levels of contaminants, such as mercury and polychlorinated biphenyls, or PCBs — toxic chemicals used in industry and agriculture, McKinney said.

So if whales and seals that head north are eating these fish, they’re likely to store higher levels of contaminants. In turn, these are passed on to people when they consume these animals.

“That’s the process known as biomagnification,” McKinney said, “whereby organic contaminants, things like mercury, increase in concentration as you move up the food web.”

High mercury levels — found especially in the liver of ringed seals — have already been found throughout the Arctic, most likely from cement and metal production in east Asia.

And mercury has been linked to a host of serious health problems, including permanent brain and kidney damage.

Studies have already shown that women of childbearing age are especially susceptible to high levels of mercury in their diet, because they can pass toxic effects on to their children during pregnancy and breastfeeding.

This is why the Arctic Council, through its Arctic Monitoring and Assessment Program, has called for a “legally-binding global agreement” to address Arctic mercury levels since 2011.

And the Inuit Circumpolar Council has been lobbying for a global solution as well.

The UN’s efforts to address environmental mercury contamination culminated in the Minamata Convention on Mercury, adopted in October 2013, which aims to control and minimize mercury levels caused by human activity.

Canada also signed onto the United Nations’ Stockholm Convention on Persistent Organic Pollutants in 2001 to ban the use of toxic contaminants like PCBs.

But even with the POPs convention, it will take years before those pollutants vanish from the food chain — McKinney’s study could show whether climate change means Arctic sea life and people will still be exposed to the pollutants.

This is troubling because high PCB levels have been linked to deficient immune function in children and appear to be linked to Parkinson’s disease and heart disease.

A 2008 study found high PCB levels in the Faroe Islands among the pilot whale population — a species closely related to the beluga. Since those findings, a total ban on all pilot whale meat and blubber consumption — to everyone, of all ages — was put into place.

Three communities in Nunavut have been helping McKinney, and her research supervisor, Aaron Fisk, with the study.

Hunters and trappers organizations and local fishermen have identified and collected samples of fish in Arviat, Pangnirtung and Resolute Bay, McKinney said.

Monitoring contaminant levels of ringed seals and belugas is continuing through the Northern Contaminants Program, McKinney said, a program set up by Aboriginal Affairs and Northern Development Canada in 1991, to monitor and eliminate, “wherever possible,” contaminants in traditionally harvested foods, its website says.

These contaminant levels will be compared with the samples of fish now being collected to see if the diet of Arctic seals and belugas are changing, and if that change is accompanied by higher contaminant levels.

“We are trying to understand how climate-linked ecological changes could contribute to changing contaminant levels, which may be increasing, decreasing or not changing,” McKinney said.

Once her study has yielded results, in about two years, McKinney plans to let the Nunavut communities know what she’s found out by distributing plain-language summaries and posters translated into Inuktitut.

She said she will also work with local groups to find the best way to communicate her findings.

If contaminant levels among beluga whales and ringed seal have increased with climate change, McKinney said she hopes her study will be able to help inform public health policies — and “provide people living in the North with information to make informed choices regarding food consumption.”