As two-week inquest wraps up, jury makes more than 30 recommendations 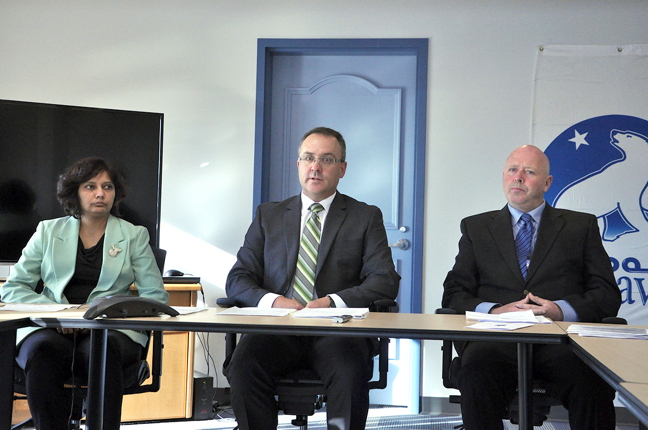 The Government of Nunavut must declare that suicide is a public health emergency.

That’s just one of more than 30 non-binding recommendations made by the six-person jury who sat through a special inquest into suicide in Nunavut that wrapped up Sept. 24 in Iqaluit.

After jury members returned late in the afternoon following more than a day of deliberations, they read their recommendations out loud inside a courtroom at the Nunavut Court of Justice building.

And the recommendations target all partners who created Nunavut’s stalled territorial suicide prevention strategy and action plan — and the federal government.

“The Government of Canada shall establish a national suicide prevention strategy by 2017,” one recommendation reads.

As the jury foreperson began reading the verdict and recommendations into the court record, grieving father Joanasie Akumalik, sitting in the gallery, buried his face in his hands and cried.

Akumalik is the father of 25-year-old Clyde Api Akumalik, whose death in October 2013 is one of two suicide deaths the jury heard testimony about over the two-week inquest.

At their highest political levels, each government and organization involved in suicide prevention should immediately issue a statement of support for the prevention strategy, the jury said.

And an annual report on the strategy’s action plan should be submitted to the Nunavut Legislative Assembly each September — suicide prevention month.

The jury also asked for a second action plan, detailing resources and evaluation criteria, by March 2016.

Many of the non-binding recommendations made by the jury at the discretionary coroner’s inquest pertain to the territorial government.

For example, the jury recommended that the GN “appoint a minister responsible for suicide prevention at the next sitting,” of the legislature.

A secretariat position should also be created within the GN, another recommendation says. This body would report directly to that minister.

“The secretariat will have the mandate and resources to demonstrate the government’s commitment to this crisis. This will be completed before April 1, 2016.”

Some of the recommendations address specific GN departments:

• [the] department of family services shall open substance abuse treatment centres in each of the three regions in Nunavut by 2018;

• the health department should create youth-targeting public awareness campaigns on cannabis use and alcohol consumption;

• the health department should establish a “formal follow-up protocol for individuals who have attempted suicide by April 2016; and,

• the education department should develop an action plan to address the high rate of student dropouts, while piloting programs — with regular reviews — that provide life and coping skills.

Some recommendations address the need for inter-agency cooperation to tackle Nunavut’s suicide rate, which is 10 times higher than in the rest of Canada.

The GN’s Department of Culture and Heritage, for example, should work with the Nunavut RCMP to create a cultural orientation program that would become part of the mandatory training given to RCMP members and front line government workers “to increase cultural sensitivity and awareness of suicide risk factors.”

That program should be implemented by April 2016, the jury recommended.

Many of the recommendations also speak to the co-operation needed between the four suicide prevention strategy partners, who are the Embrace Life Council, Nunavut Tunngavik Inc., the GN and the Nunavut RCMP.

“All partners will incorporate Inuit Qaujimajatuqangit in every initiative to restore the role of elders as mentors, leaders and educators immediately,” one recommendation says.

And these partners should provide “adequate and dedicated multi-year funding” for the suicide prevention initiatives of the Embrace Life Council, the Kamatsiaqtut Helpline and the regional Inuit associations by April 2016.

The federal government also needs to re-establish its funding to the regional Inuit associations to pay for other suicide prevention initiatives by April 2016, the jury said.

Before the inquest began on Sept. 14, Nunavut’s chief coroner, Padma Suramala, said her office would follow up every six months with the various organizations that the recommendations target to monitor implementation.

Moments before a court clerk declared the inquest closed, presiding coroner Garth Eggenberger thanked the jury for performing their duty “truly and well,” and also thanked the two families who shared their experiences with suicide on the first day of the inquest.

“I wish to thank the members of the Uttak and Akumalik families for their patience and courage to attend this very public intrusion into their healing. I hope this has helped provide some healing for you.”