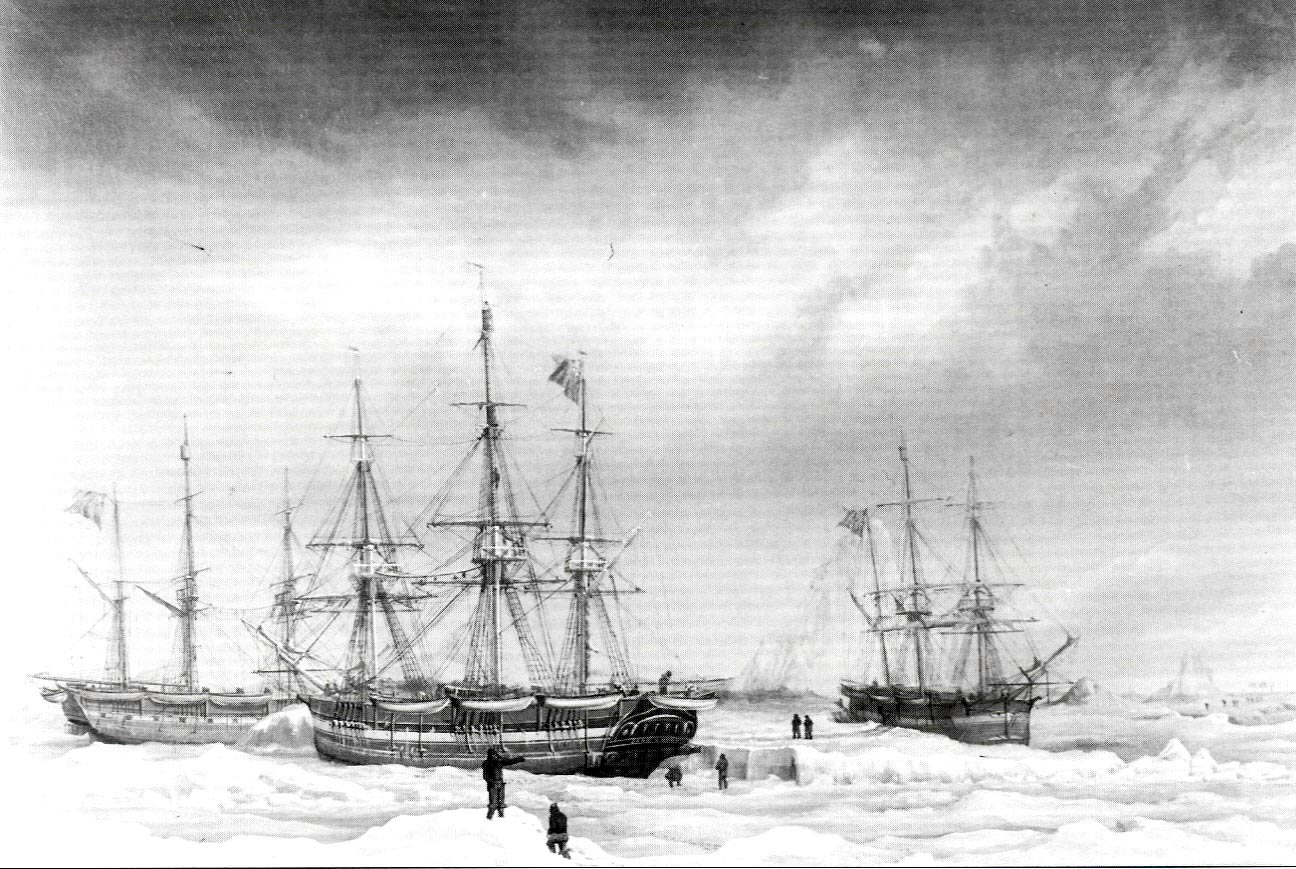 During the summer of 1830, dozens of British whaling ships were destroyed by ice and bad weather in Baffin Bay and Davis Strait. (HARPER COLLECTION)

Whaling was an occupation fraught with hazards, especially in the dangerous waters of Davis Strait. In 1819, 10 ships were lost in Baffin Bay. But that was only the beginning.

During the decade of the 1830s, the British Arctic whaling industry suffered a series of disasters which almost destroyed the industry completely. In 1830, 91 British ships entered the unusually fierce weather of Davis Strait. Many did not return and most of those that did were badly damaged, with a very poor catch to show for their trouble.

A number returned to their ports “clean,” whaler parlance for “empty,” and almost every surviving ship had been damaged.

The fleet had sailed easily through open water up the west coast of Greenland. By June 10, almost a month earlier than usual, 50 vessels were near the Devil’s Thumb, a landmark column of rock on the coast of Melville Bay, awaiting an opening in the ice through which to cross to the Baffin coast. When the ice finally opened, 23 ships headed across; more followed.

The ice was heavy. When a storm arose on June 23, the whalers knew they were in trouble. By the following night the winds had reached gale force. Hail and snow added to the dangers. Nine ships were lost that night.

Others were saved only by being lifted by the pressure of the ice onto the pack itself. On June 30, the most southerly ships were hit by a gale and a number of other vessels destroyed.

The Achilles was lost on June 24. Alexander Kidd left an account of how survivors were brought home aboard ships that survived:

“The crew of the Achilles and the French ship were taken on board of the St. Andrew of Aberdeen, and kindly treated. The number of hands on board of the St. Andrew now amounted to one hundred and fifty, and as the provisions were insufficient for so many, the majority of the shipwrecked crews resolved to proceed to some vessels which were perceived about twelve miles distant. Provisions were served out to them, and what clothes they had saved were put into the boats, which were dragged along the ice. The journey occupied about sixteen or seventeen days, during which the seamen were subjected to great privations … and some of the boats were destroyed which contained the few articles they had previously saved. [When] they reached their destination, and were kindly and hospitably received by Captain Stevenson, of the Horn. There were at one time nine boats’ crews on board of that vessel…”

In July, more ships were beset and more wrecked. It was not until late August that leads began to open and some ships managed to reach the “West Land”—Baffin Island. But it was too late in the season for serious whaling.

A nameless captain left a touching description of watching his ship succumb to the ice:

“On the 2nd of July our vessel … was caught by the ice, which came with such overwhelming force against her, that it fairly lifted her out of the water, on the surface of the ice, as if to give us the last look of her, before she parted. She made a most majestic appearance, standing as upright as if she had been docked. [Finally] I abandoned her, to take my seat on my chest that was standing on the ice, there to witness the last struggle of our gallant bark.

“I am unable to depict the magnificent scene that presented itself to my view; but it is one which would have suited either poet or painter. The first symptoms of destruction appeared among the half-deck planks; then the standing rigging and stays became slackened and nothing was heard but the crashing of the hull as she went to pieces. Her masts meantime slowly bent toward each other, as if to take their final adieu… They then fell with a tremendous crash, and the hull was buried forever beneath a floe of ice six feet in thickness.”

In all, 19 ships were wrecked and 12 seriously damaged. More were beset by the ice for lengthy periods of time. Chaos ensued.

Over a thousand men were camped on the ice of Baffin Bay. According to whaling custom, shipboard discipline ended with the wreck of a vessel; these men, then, were not bound to obey their officers.

The ensuing free-for-all became known in whaling lore as Baffin Fair. It was a custom among Arctic whalers—”an old and very stupid custom,” in the words of whaling historian Basil Lubbock—to set fire to wrecked ships once everything easily salvageable had been taken from them.

They burned them to the water line, allowing chests and casks from the hold to float free. In the first week of July, flames and smoke were seen over a vast expanse of Baffin Bay. Rum casks were saved from many of the vessels, and the men partook generously of their contents.

Miraculously, no lives were lost as a direct result of the shipwrecks. However, a number of drunken sailors died of exposure after wandering away from their camps on the ice.

When word of the disasters in Baffin Bay reached home ports, the price of whale oil rose quickly to £60 a ton. Twenty-one ships returned home clean.

In 1830, the British fleet incurred total losses of £142,600 and recorded returns of a meager £55,265. That year, Basil Lubbock wrote, was the “worst year in the whole history of Arctic whaling.”

The bacchanalian excesses of Baffin Fair would long be remembered among whalers.