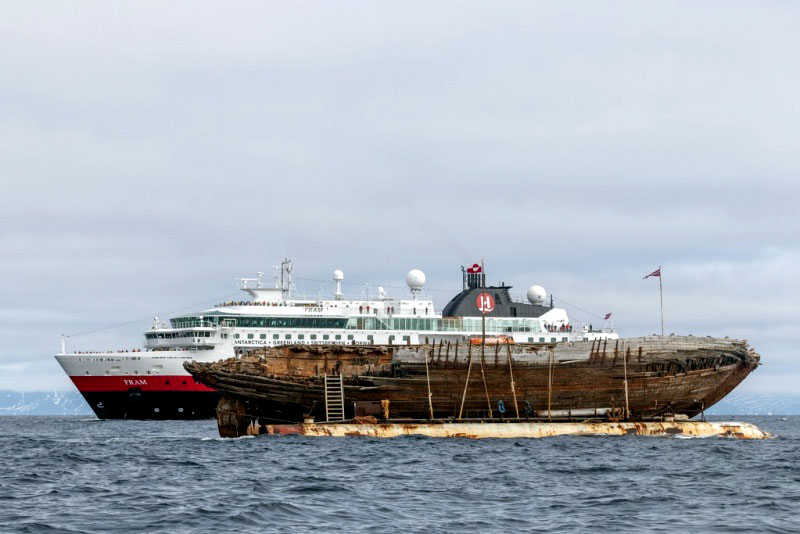 One was a historic ship, a derelict resting on a barge, headed south and east to a new home. The other, historic in name only, carried wealthy passengers north to the waters that had claimed the other almost a century ago.

The first was Roald Amundsen’s famous ship, Maud. The other was the Fram—no, not Fridtjof Nansen’s famous old Fram, which sits well preserved and protected in a wonderful eponymously named museum in Norway—but rather the new Fram, a cruise ship owned by the Norwegian operator Hurtigruten.

They met off the west coast of Greenland. The Fram’s master, Ole Johan Andreasssen, told Cruise Industry News, “It was a very special moment. Looking at the hull, you think about everything the vessel and her crew has been through, and how her men struggled and worked through years of extremely challenging conditions. Thinking about it is both mind-boggling and emotional.”

Roald Amundsen is the polar explorer whose name will forever be associated with Gjoa Haven. He wintered there twice in his quest for the Northwest Passage in the stalwart little Gjoa, and named the harbour for his ship.

For an encore, through meticulous planning and the use of Inuit clothing and travel methods, he beat Britain’s hero, Robert Scott, to the South Pole, thereby earning the everlasting scorn of the British who thought their flawed hero deserved the prize.

For the hat trick, he wanted to demonstrate that a ship could be used as a frozen-in scientific research station for years on end in Arctic ice and then, almost incidentally, reach the North Pole.

But he needed the right ship. He commissioned the Maud, on the model of the Fram, in Norway, where she was launched in June 1917 and named after the young country’s queen. Christening the vessel by smashing a block of ice across her bow, Amundsen proclaimed, “You are made for ice. You shall spend your best years in the ice and you shall do your work in the ice.”

Although Amundsen traversed the Northwest Passage in the Maud, his ultimate goal—and the hat trick—eluded him.

Eventually, the ship was seized by his creditors, and sold in December 1925 to the fur-trading giant, Hudson’s Bay Company, for $40,000, less than a quarter of its original cost. They renamed the vessel the Baymaud, and it became one of the company’s three “Bay” ships: the Baymaud, Baychimo and Bayeskimo.

The company worked the Baymaud for some years in the central Canadian Arctic—today’s Kitikmeot region—but it didn’t take long for men experienced in those waters to come to an unpleasant conclusion—the Baymaud was “not suitable for navigating the shoal waters of this section of the district.” The qualities that Amundsen had sought in a research vessel were not those that the company needed in a supply vessel.

Her captain left the vessel at Cambridge Bay in 1927, anchored and tied securely to boulders on the shore. It would serve as a floating machine shop, warehouse and wireless radio station. The first-ever winter weather reports were transmitted from the Baymaud that first winter.

In 1930 the Baymaud developed a serious leak around the propeller shaft. The company concluded, “She is of no further value to the Hudson’s Bay Company.” The vessel sank during the winter of 1931-32.

Over the years, the vessel remained there, a part of it above water. For a time the company salvaged timbers to use in constructing a warehouse and to use as firewood. Inuit also salvaged wood for houses.

In 1990 the HBC sold the ship to the municipality of Asker in Norway. A Norwegian dive team found the vessel to be “in a terrible state of disrepair,” but concluded that it could be raised and restored, if done within the next five to 10 years. Marine archaeologist and historian James Delgado from the Vancouver Maritime Museum surveyed the vessel in 1996 and, using carefully chosen words, called it an “archaeological site in transition” and concluded that the ship “should not be viewed as a ‘stable’ site that will always be available to shore-based tourists.”

The Norwegians received a Canadian cultural properties export permit in 1993, but it expired five years later with nothing having been done. More recently, when the Norwegians expressed renewed interest in taking the ship back across the Atlantic to its birthplace, the community of Cambridge Bay raised objections and launched an online petition under the name “Keep the Baymaud in Canada.” The hamlet ultimately lost that dispute.

A Norwegian team raised the ship in 2016. Secured to a barge, it travelled as far as Greenland in the summer of 2017 and wintered there. Now, as of this writing, it is continuing its journey to Norway.

James Delgado summed up the ship’s two very different careers under two flags: “As Maud the ship explored the Arctic coast of Europe and Asia and played a significant role in advancing Arctic exploration from ‘discovery’ to scientific observation. As Baymaud, the ship played a role in the transformation of Canada’s Arctic coast from an isolated region into an active centre for trade connected to the world by radio.”

The Maud is in terrible shape. It will take a tremendous amount of work to restore it. But its owners seem determined to do so, and to remake it as a museum ship anchoring a commercial enterprise in Norway.