An Early Description of a Kayak 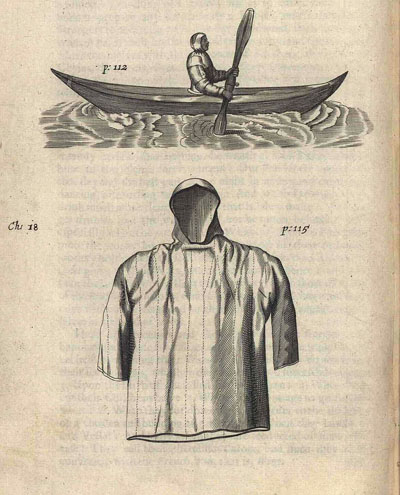 An illustration from Charles de Rochefort’s book, published in 1658, entitled The History of the Carrbby-Islands.

Charles de Rochefort was a French-speaking Protestant minister who was sent to the Caribbean to minister to believers there in the 1600s. In 1658 he published a book in French about the geography and people of the Caribbean. It was based on his own observations and those of other authors. The work was eventually translated into English and published as The History of the Caribby-Islands in 1666.

This work, virtually unknown to northern scholars, contains an unexpected chapter on narwhals, Inuit and kayaks. That chapter came about because the body of a narwhal was found washed ashore on a Caribbean island in 1644.

As was common at the time, the lengthy chapter title leaves the reader with no doubt as to what the chapter is about. It reads: “A particular description of the Sea-Unicorn which was cast ashore at the Haven of the Tortoise-Island, in the Year 1644 and a pleasant Relation, by way of Digression, of several beautiful and rare Horns brought lately from David-Streight; with an account of the Country, and the Dispositions of the Inhabitants.” “David-Streight” of course refers to Davis Straits.

De Rochefort describes a voyage to Davis Strait made by a Dutch captain, Nicholas Tunes, in 1656. Tunes wanted to “discover some new Commerce in the Northern Parts,” and so found himself in these waters. He encountered Inuit on the coast of West Greenland. De Rochefort describes what Tunes saw:

“As soon as the inhabitants of the Country… perceived the Ship, they came towards it with their little Boats, which are so made as that they carry but one person…

“These little vessels are so admirable, whether we consider their materials, or the strange industry in the making of them, or the incomparable dexterity whereby they are conducted, that they may well be allow’d a place among the descriptions which this delightful digression shall furnish us with.

“They consist of little thin pieces of wood, whereof most are cleft like Hoops. These pieces of wood are fasten’d one to another with strong cords made of the guts of fishes, which keep them together in a figure fit for the uses to which they are designed. They are covered on the outside with the skins of Sea-Dogs, which are so neatly sewn together, and so artificially done over with Rozin [resin] about the seams, that the water cannot make the least entrance into them.

“These little Boats are commonly about fifteen or sixteen foot in length, and they may be in the midst where they are biggest about five foot circumference. From that place they grow smaller and smaller, so that the ends or extremities of them are very sharp and plated as it were with a white bone, or a piece of the Unicorn’s horn before described. The upper part is flat and even, and cover’d with leather as the rest, and the lower part is fashioned like the belly of a great fish, so that they are very swift upon the water.

“They have but one overture, or open place, which is just in the midst of the whole structure. It is rais’d a little about with a small ledge of Whale-bone, and it is made fit for the reception of one man, so as that being in it, his waste [waist] fills the hole. When the Savages who invented these kinds of Boats would make use of them, either to go a fishing or to divert themselves on the water, they thrust down their feet and thighs in at the hole, and then sitting down they so fasten the short Coat they have about them to the ledge which is about the hole, that they seem to be grafted into the little vessel, and to be part of it.”

This was de Rochefort’s description of a kayak, a watercraft that he apparently never actually saw, garnered from the descriptions offered up by a whaling captain.

Next Week: Using the Kayak