The Book of Wisdom for Eskimo, Part 1 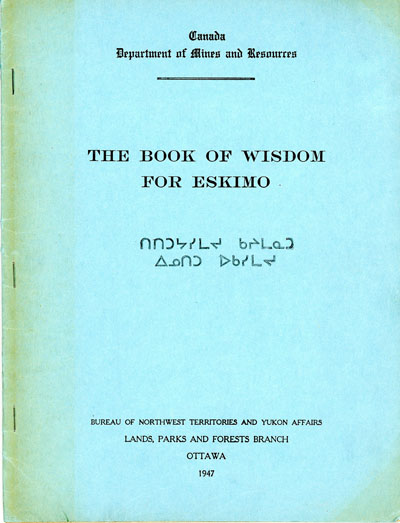 The front cover of The Book of Wisdom for Eskimo, published by the federal government in 1947. 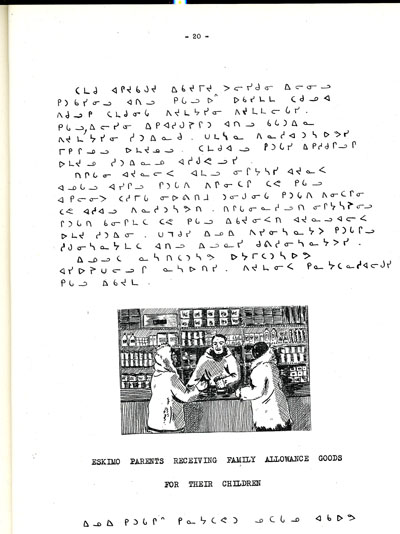 A page from the Inuktitut section of The Book of Wisdom for Eskimo. It’s written using old-fashioned syllabics, produced by Sam Ford, with no use of medials or finals.

Recently I wrote about The Eskimo Book of Knowledge, written for Labrador Inuit in the 1930s. A syllabic version of that book was planned but never appeared. It would be 10 years before a different but similar book would appear in syllabics, for Canadian Inuit.

By 1947, the population of Inuit in Canada was estimated to be 8,440 and they lived in three Canadian jurisdictions: Northwest Territories, Quebec, and a small number in northern Manitoba. Labrador was not yet part of Canada.

The government was belatedly taking an interest in the welfare of the Inuit, albeit from the far-off vantage point of Ottawa. This was half a decade before the first book by Farley Mowat brought suddenly and dramatically to the attention of the Canadian public at large the starvation that was affecting Inuit in the inland Keewatin district, and before the government relocated a number of Inuit from Quebec and Pond Inlet to the High Arctic communities of Resolute and Grise Fiord.

Inuit still lived on the land and most schools were still run by the Anglican and Catholic missions. Both churches had produced a number of religious items for Inuit to read – Bibles, prayer books, catechisms, biblical interpretations. The Anglicans had been doing so since the 1870s.

Publication of these items was made more confusing by the fact that Inuit used two writing systems – syllabics in Baffin, Keewatin, Arctic Quebec, and part of the central Arctic (now called Kitikmeot), and an alphabetic writing system farther west. The writing system using the English alphabet is usually called Roman orthography.

But there was nothing of a non-religious nature to read. And so the Government of Canada decided to publish a book to inform Inuit about matters it thought that they should know in a post-war world that was changing rapidly, even for isolated Inuit.

The book that resulted was a 28-page effort called The Book of Wisdom for Eskimo. Published with English and syllabics on facing pages, the title on the cover was translated into Inuktitut and written in syllabics – an old style of syllabics without any “finals” and with a glaring spelling mistake caused by the omission of a complete character.

The book was divided into two sections, the first dealing with health issues and the second with survival and other matters. The authors of the English text are anonymous, the texts having been supplied by the Department of National Health and Welfare (for part one) and the Bureau of Northwest Territories and Yukon Affairs, a branch of the Department of Mines and Resources (for part two.)

But if the authors were anonymous, at least the translator was well-known. The text had been translated by Sam Ford, a member of the large and famous Ford family of Labrador, many of whom had served with the Hudson’s Bay Co. at posts throughout the eastern Arctic.

Most Inuit today who have seen this scarce book find the syllabic text laughable. It’s easy today to laugh it, in either language.

But if the syllabics is demeaning, it may well be because the English is simplistic. In the section, “Where Sickness Comes From,” for example, the English text begins with this explanation: “Not long ago a lot of people got sick in the same camp. They all had the same sickness. They had lots of good food. They had a good camp. They were very happy before the sickness came. Then one young man got sick. Everyone liked him and they were sorry. Everyone went to see the sick young man. In a few days a lot of the people were sick. All had the same sickness as the young man. It was not a happy camp now.”

Next Week – More on The Book of Wisdom for Eskimo.