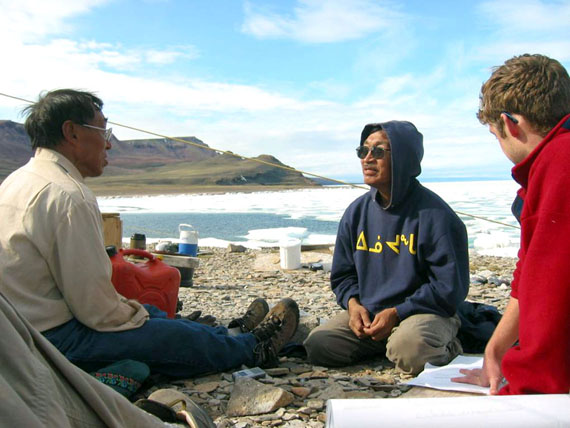 Isaac Shooyook, now the MLA for High Arctic, with Kik Shappa of Arctic Bay and James Ford of McGill University in 2007 near Arctic Bay, where they worked together on a research project that looked at how climate change affects hunters. (FILE PHOTO)

In the fall of 2013 Isaac Shooyook of Arctic Bay made history by becoming the oldest person elected to the Nunavut legislature in its 14-year history. He was 74.

But, when one thinks of Isaac Shooyook, “old” is not a word that comes easily to mind.

For Shooyook is not “old” but rather “timeless.” “Resilient” and “gentle” are adjectives that also suggest themselves. And making history is nothing new for this quiet unassuming man.

In 1965, Isaac Shooyook was a young hunter of 26 living in a traditional camp at Fort Ross on the Boothia Peninsula. A former Hudson’s Bay Co. trading post, Fort Ross had been closed in 1947 because it had proven too difficult for the company to resupply. Inuit in the area then traded into Spence Bay (now Taloyoak.)

By the mid-1960s, at a time when many Inuit had already moved into larger communities where the government provided housing, education and medical services, this camp of about 20 people, under the leadership of Napatchee-Kadluk, was extremely isolated.

Napatchee-Kadluk’s wife, Soosee, was mentally ill. She suffered from paranoid schizophrenia. She had spent two periods of time in hospital in Edmonton, but each time she returned, uncured, to her traditional camp and her family.

When in the grip of her madness, Soosee was dangerous to her family and campmates. She would threaten to kill people, and blow her breath on them, and they feared that this would transmit her illness to them.

She was a large woman, and strong. At times she destroyed some of the camp’s equipment, damaging boats and other items that were crucial to the survival of a hunting community.

In July 1965, the situation became critical. We know of the state of fear in the community largely because one of the camp leaders, Shooyook’s father, Kadlu, who was Napatchee-Kadluk’s brother-in-law, kept a detailed diary of the events. His observations are heart-rending. On July 9th he wrote:

Napatchee-Kadluk decided that everyone except Soosee and him would relocate to a small island nearby, close enough that they could observe her behaviour. He would remain in the camp with his wife.

But Kadlu dissuaded him from staying. In the end, everyone but Soosee left the camp, but not before they had bound her tightly with ropes. From the safety of the island, they watched her through their telescopes. And they saw her break her bonds with superhuman force.

“During today she has knocked over all the tents,” wrote Kadlu. “She’s breaking up all the gear. We are watching her doing this… We had to leave our gear, and now she is breaking it all up. She wants to kill us… The devil is making her do these things… We are praying to God in Heaven to help us…”

Soosee was not getting any better. And so Napatchee-Kadluk and Kadlu conferred. Kadlu, of course, recorded their decision in his detailed diary:

“We are certain that the devil is making her do these things. The only thing to do now is for someone to go after her. If she runs away she will not be hurt, and they will not do anything to her. If she comes after them she will be shot, because we are really afraid of her, because she has been saying that she is going to kill everyone…”

Shooyook and Aiyoot were instructed to take the necessary but regrettable action.

Naketavik recalled later what happened when the party reached the beach:

“When Soosee saw them she started to come towards them. A number of shots were fired to warn her away, but she kept coming… When the bullets were flying around her she just kept on coming towards them. She was blowing in their faces.”

Shooyook ran out of ammunition. He took Aiyoot’s gun and fired the shots that killed his aunt, Aiyoot’s mother.

Their campmates, watching from the island, knelt in prayer and gave thanks to God. As Kadlu noted, He had helped them to triumph. They returned to camp and buried Soosee shortly thereafter.

That fall a plane arrived to take camp children to far off Aklavik for school. The plane also carried Kadlu’s account of the tragedy to the RCMP.