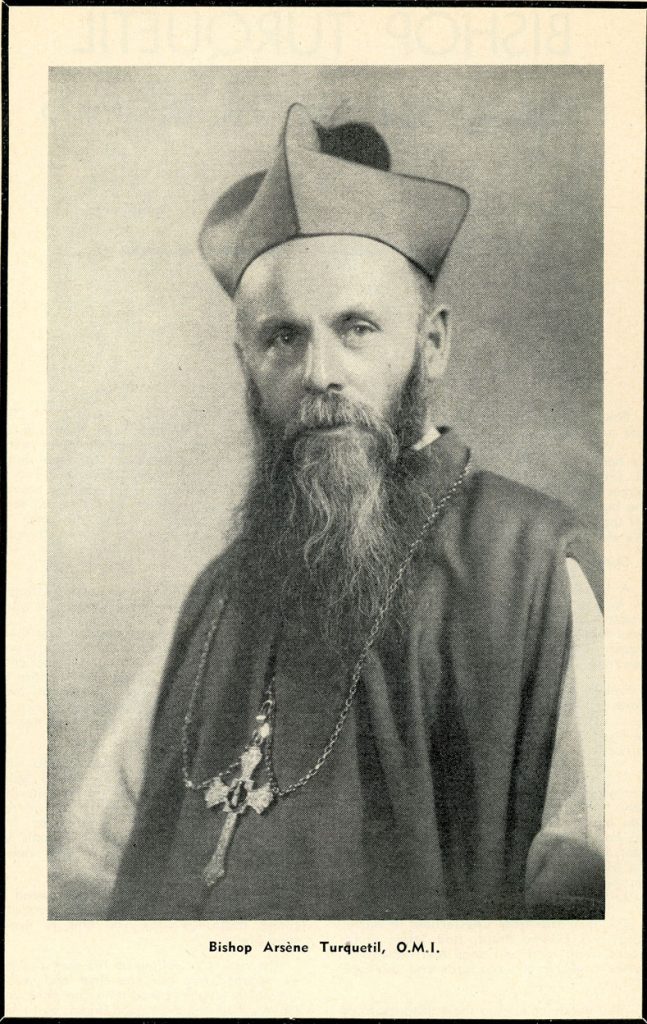 Arsene Louis Eugene Turquetil was born on July 3, 1876, in Reviers, France. Orphaned at a young age, he was adopted by nuns of a local parish, so it can be truly said that he had a religious upbringing.

After completing his studies in France and Belgium, on his ordination to the priesthood in 1899, he was asked his preference for a future ministry; he replied “Anywhere, as long as it is a mission … but not in Europe.” In fact, his fervent desire was to minister to the Inuit.

He was sent to Canada, where he served the Oblate order for 42 years. Pope Pius XI once told him, “If I could but visit some missions, yours are the ones I would choose.”

His first posting was at Brochet, on Reindeer Lake in northern Saskatchewan. This might seem like an odd place from which to begin a mission to the Inuit, but in fact it made very good sense.

In 1868 Father Alphonse Gasté, the missionary there, had made a visit far to the north to the isolated Ahiarmiut Inuit, who lived at the very edge of the northern forest in the south-west corner of what is now Nunavut.

The Ahiarmiut traded sporadically with the Hudson’s Bay Co. at Churchill, but Gasté convinced them that it would be more convenient to travel south to Brochet to trade. The missionary knew that at Churchill they were exposed almost exclusively to Protestant ideas.

At Brochet he could minister to them directly. The Inuit bought the idea; they continued trading into Brochet until about 1920, by which time independent white traders had taken the trade to them, establishing small posts in the barren lands.

Turquetil made his first trip into Inuit territory in 1901 and continued to minister to the Ahiarmiut who came to Brochet to trade.

In 1910 the Keewatin vicariate was formed and Bishop Charlebois chose Turquetil to make plans for a mission within Inuit country. Finally, in 1912, he was sent to establish the Oblate mission at Chesterfield Inlet, which would be his home for so many years.

An HBC post had been established there the previous year, and the Oblates knew that Anglican Bibles, though not missionaries, had already reached the area from southern Baffin Island with Inuit who were sometimes transported to the area to work for the whalers.

Still, it took Turquetil many years to make his first conversions. In fact, in 1916 his superiors informed him that the mission would be closed if no conversions could be expected.

But in that year, the miracle happened. Joseph Tuni, a well-known angakkuq—a shaman—converted.

Although the priests faced opposition from shamans and had to preach against their influence, calling their methods trickery, they were not above a little deception of their own.

Turquetil had received from France a little booklet on the life of Thérèse de Lisieux. (Some years later, she was declared a saint.)

The envelope also contained some earth taken from beneath the first coffin of Thérèse, the Little Flower of Lisieux, and a note that it could be used to perform miracles.

The next evening, Father Turquetil surreptitiously approached some Inuit visitors from behind and scattered some of the holy earth on their hair.

“The next Sunday, Inuit came to the mass in great numbers,” wrote researchers Laugrand and Oosten “and Tuni announced that he and two other men wished to be baptized with their wives and children.”

Some would call this a miracle attributed to Thérèse; others would call it a deception. Father Turquetil, with no apparent sense of irony, wrote: “These poor people take us for sorcerers … they think we are casting spells and they are afraid, not knowing what spirit we address.”

“In the Eskimo mind, the priest occupies the eminent place formerly held by the sorcerer. Is not the Catholic priest … a mediator between God and men? Was not the sorcerer also a similar link between the spirits on one side and the Eskimos on the other?”

He referred to another missionary who had suggested that the “true translation of the word priest should be “angakok,” [angakkuq] that is, sorcerer, and not “Iksirardjuar” [iksirarjuaq] … which … means ‘the great writer.’”

Advancement followed for Turquetil. He was appointed Prefect Apostolic for Hudson Bay in 1924, Vicar Apostolic in 1931, and consecrated as bishop in 1932. In 1930, he began the construction of St. Theresa’s Hospital in Chesterfield Inlet; it was completed two years later.

There was no spirit of ecumenicism in the Arctic at the time. It’s been largely forgotten that the Roman Catholics called the Anglicans the “Reds” after the colour of the Anglican prayer book.

The Reds were the enemy, not shamanism or superstition. If a follower of the Anglicans wished to convert to Catholicism, he had to turn over his red prayer book to the priest, who was then required to keep it or burn it.

When the Oblates produced the first Catholic hymnal and prayer book in Inuktitut syllabics, the script bore a decidedly different look than that of the Anglican syllabics.

That is because Turquetil used the syllabic lettering that he had been familiar with at Brochet, that used for the Chipewyan people. It had a much more square and boxy appearance than the Anglican symbols and was quite distinctive.

When Father Turquetil retired in 1942, he left over 30 missionaries working in the Arctic. He died in 1955, in Washington, D.C.

His rule of conduct during this long life and ministry was this: “Know well what you wish to do: do it with all your heart and, no matter what happens, never get discouraged.”