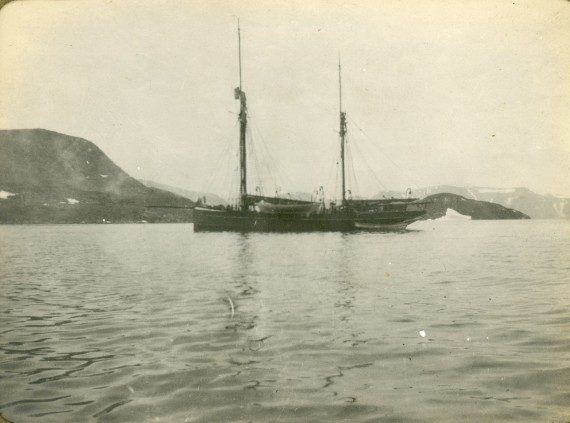 The Albert anchored in open water off Pond’s Bay, as the area around present-day Pond Inlet was known, between 1903 and 1907. (PHOTO COURTESY OF KENN HARPER)

In 1902 a Scottish shipowner, John M. Hunter Mitchell, established the Dundee Pond’s Bay Company and purchased a sturdy little vessel, the Albert. It had been built in 1890 at Fellows’ Yard in Great Yarmouth as a hospital ship for the Royal National Mission to Deep Sea Fishermen.

A sailing vessel, 101 feet long, with a tonnage of 155 gross and 89 net, the Albert was built of oak with a teak deck. The phrases “Heal the Sick” and “Preach the Word” were inscribed on its bows, and the text “Follow me, and I will make you fishers of men” graced its wheel.

Mitchell hired as his agent in the field a remarkable man, James Mutch, who was a native of Boddam on Scotland’s east coast, a few miles south of the famous whaling port of Peterhead.

Born in 1848, Mutch had already spent over 40 years whaling in the Arctic. He knew the North and the whaling trade. He also knew the Inuit and their language.

In 1903, Mutch sailed the Albert from Dundee to Pond’s Bay, as the area around present-day Pond Inlet was then known, intending to keep the vessel permanently in the Arctic at a harbour there.

The ship would in effect become a whaling and trading station; white whales and narwhal would be hunted from smaller boats, and Inuit would hunt whales on their own or as agents of Mitchell’s company.

Mutch would also trade with the Inuit. This would be the first shore-based whaling station in the High Arctic.

He brought with him another veteran whaler, William Duval, and a number of Inuit from Cumberland Sound. The German-born Duval—known to the Inuit as Sivutiksaq, the apprentice harpooner—had lived for over two decades in Cumberland Sound, where he worked for a number of whaling companies, was married after the local fashion to an Inuit woman, and spoke the Inuit language fluently.

Duval’s influence was instrumental in convincing two boat crews of experienced Inuit whalers from Blacklead Island to relocate with their families to the Far North. Among them were the well-known hunter Kanaaka, and Duval’s brother-in-law Veevee.

After passing the first winter at Erik Harbour, Mutch sailed the Albert north and west into Admiralty Inlet, where Duval and his family were left to winter.

The vessel returned to Pond’s Bay, entering the small strait between Beloeil Island and the Baffin mainland, offshore from the place the Inuit called Igarjuaq, the big cooking place, so called because it resembled a fireplace, especially when the wind-driven fog moved out from the harbour like smoke from between the boulders.

Mutch named the harbour Albert Harbour. He and the Cumberland Sound Inuit established their shore station, the first permanent trading station in the High Arctic, near a camp of Tununirmiut on the mainland just west of the harbour. He also built a storehouse on the northern shore of Pond’s Bay at Button Point on Bylot Island.

Mutch thought the Inuit of Pond’s Inlet drove a hard bargain, their skills no doubt learned through decades of dealing with Scottish whalers. “The real Pond’s Bay Eskimo,” he wrote, “had been coming and going all winter, trading a fox-skin when they had one, but always wanting nearly the home value for it for anything they might bring. They had an idea that seal-skins were worth more than ten times what they were sold for in the London market.… When a bear-skin was brought, though it was small, a telescope or a gun was asked for it.”

Winters were hard for the Inuit, and Mutch attributed this to the paucity of sled dogs. “Without dogs,” he noted, “they cannot all get to the best hunting-ground, and even at the best ones, I can hardly say that I have seen thus far, nor have I heard of, any good catches of seals.”

He thought many of the men were reliable and conscientious hunters, but that there were also many indolent and lazy individuals who lived off the results of other people’s efforts. He described them collectively as “a happy go-lucky race” and said that “it takes many hungry days, and dark ones, to drive out all their fun.”

In 1905 James Mutch left his ship in harbour and went back to Scotland for the winter on another ship, returning to the North the following year aboard the Eclipse, commanded by Captain William F. Milne.

Fred Cameron, an experienced whaler whom the Inuit called Kaamalat, manned the post during Mutch’s absence.

In 1907 Mutch finally took the Albert itself back to Scotland. The following year he purchased the vessel from Mitchell’s Dundee Pond’s Bay Company and, with some associates from Peterhead, formed his own enterprise, the Albert Whaling Company.

Mutch refitted the Albert and installed an engine, its first.

But the reference to whaling in the company’s name was wishful thinking. The take for 1911 is illustrative: 200 walrus, 100 fox, 20 bears, but no whales. The whaling industry in Arctic waters had gone the way of its prey, the bowhead; both had effectively died.

This article is adapted from the author’s book Thou Shalt Do No Murder.