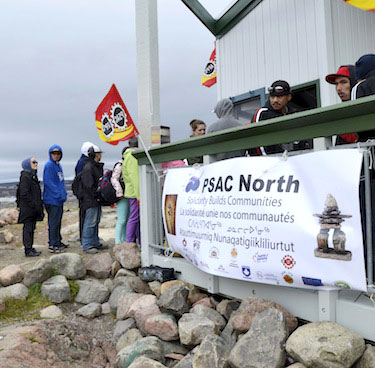 People line up for food at the annual Labour Day barbecue held by the Northern Territories Federation of Labour and the Public Service Alliance of Canada Sept. 2, 2013 at Sylvia Grinnell Park in Iqaluit. Unions in the three territories have now launched a campaign for a $15-an-hour minimum wage in Nunavut, the Northwest Territories and Yukon. (PHOTO BY DAVID MURPHY)

A new year begins and with it a new hope that the working lives of northerners continue to improve.

PSAC North is today announcing that we are starting a new campaign to increase the legal minimum wage.

In partnership with other labour organizations across the North, we are calling on all three governments to increase the minimum wage to $15 an hour by 2019.

Much of our efforts will be in the spirit of the “Fight for $15” movement in a number of Western countries, but as many may know, minimum wage raises are already underway in many other areas of Canada.

In Alberta, that province will increase its rate to $15 per hour this October. The B.C. government is likewise looking to implement a $15 per hour minimum wage in the next few years.

These are bold acts that are good for low-wage workers and good for the economy.

These changes in our southern provinces will mean that the North will no longer be in the lead with the highest rates in Canada.

It is high time that our territorial governments act to ensure our workers are not left behind, especially as it costs more to live in the North than the rest of Canada.

Between now and the upcoming session of the Nunavut legislative assembly, we will be asking residents of Nunavut to sign a petition and support increasing the minimum wage to $15 per hour by 2019.

We will have a paper version of the document in the PSAC regional office, the Nunavut Employees Union office, and a number of other locations throughout the territory.

The results of that petition will be presented to the respective legislative assemblies at a yet to be named date.

We will also be asking citizens to sign a postcard that will go to the premier’s office, and which will show support for the minimum wage increase.

While there is expected to be resistance to this move by members of the business community and others who insist such an increase will disrupt the economy, there is plenty of evidence that shows such a move will mean decreased poverty, decreased reliance on public assistance, increased fairness and increased opportunity for those in our society who most need it.

There are residents who are currently forced to work more than one job and who must work for more than 40 hours per week to make ends meet.

Often they are the most marginalized of our society, whether they be new Canadians, indigenous peoples, or women and may have children or dependents that they are supporting.

Let’s start the year off right and demand that our northern territories be generous to low-income earners. It’s time for a raise.