The Arctic Council sticks together; the U.S. stresses climate change 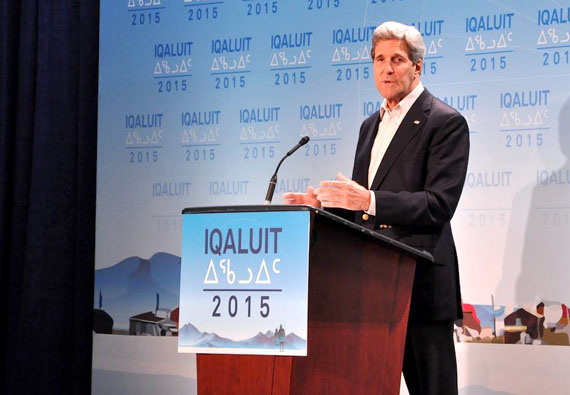 U.S. Secretary of State John Kerry at an April 24 news conference at the cadet hall after the end of the Arctic Council ministerial meeting in Iqaluit. (PHOTO BY THOMAS ROHNER)

If you’re wondering what all the fuss was about and don’t have time to read the many documents the Arctic Council’s eight ministers accepted April 24 at their Iqaluit meeting, don’t fret.

We did the reading so you don’t have to.

Here’s a short summary of highlights from the April 24 Arctic Council ministerial gathering in Iqaluit.

And if you don’t trust our interpretation, you can find all the source documents here, including the Iqaluit Declaration, the Senior Arctic Officials report to ministers, and copies of the various agreements and frameworks that ministers approved.

1. The sealing war with the European Union? It’s over.

Canada and the EU are once again making nice with each other, following agreements that will let Inuit seal producers take advantage of an exemption that will allow their products into the EU market.

And after blocking it in 2013, Canada now backs the EU’s desire for full observer status at the Arctic Council.

“I can start off by saying that Canada supports the EU application for full observership,” Nunavut MP Leona Aglukkaq said April 24 at a news conference.

The EU’s big problem now is Russia, which would likely veto the EU’s Arctic Council observer bid in retaliation for the EU-Ukraine economic agreement that is bitterly opposed by Russia and by pro-Russian fighters in eastern Ukraine.

The EU’s subsequent economic and diplomatic sanctions against Russia won’t endear them to the regime of Vladimir Putin either.

In any case, the Arctic Council has postponed all observer applications until at least 2017, pending a review of observer issues that will likely lead to a report for the U.S. ministerial meeting that year.

2. Under the U.S., climate change is back on the Arctic Council’s agenda.

“It is not going to come as a surprise to anyone that addressing climate change is a key pillar of the United States chairmanship program, just as it is, in fact, a key part of United States foreign policy writ large today,” U.S. Secretary of State John Kerry told reporters.

He also said the U.S. wants an “ambitious” global agreement on reducing carbon dioxide emissions at the big climate change conference to be held in Paris this December.

3. The Arctic Council still thrives in spite of the worst East-West crisis since the end of the Cold War.

Despite the dirty little war in eastern Ukraine and the nasty diplomatic slanging match that puts Europe and the United States on one side and Russia on the other, the Arctic Council has hung together.

Yes, Russia has become the neighbourhood bad boy. But Russia’s Arctic regions contain more land and more people than any other member state.

4. The Arctic Council will go to work on telecommunications.

Sick of your lousy, expensive internet and cell phone services? The Iqaluit Declaration, reflecting a U.S. chairmanship agenda item, will set up an infrastructure experts group to produce a circumpolar telecommunications assessment for the 2017 Arctic Council ministers’ meeting.

And they want to “explore ways” to improve telecommunications in the Arctic.

Yes, they’re moving slowly. But at least they’re talking about it.

5. The Arctic Council is still moving on oil spill prevention and response.

As a follow-up to the May 2013 oil spill prevention agreement signed in Kiruna, Sweden, Arctic Council ministers have signed off on an action plan framework aimed at preventing oil spills from either petroleum activity or marine transportation.

It’s non-binding and mostly voluntary — but the eight nations agree to co-operate and share information on a wide range of issues related to emergency response in the Arctic.

U.S. officials say they will continue to support the Arctic Economic Council, Canada’s showcase project for its chairmanship.

But the AEC’s three working groups have yet to start functioning. That’s because there’s no funding for any of them yet.

7. If you’re a supporter of protected areas, the Arctic Council brought some good news.

On April 24, ministers agreed to a framework for a pan-Arctic network of marine protected areas.

8. If you’re an Arctic scientist, you have reason to smile as well.

The Iqaluit Declaration contains a commitment to create a legally binding agreement on scientific co-operation by 2017.

Arctic Council member states are more aware of indigenous peoples than ever before.

For example, they now pay homage to indigenous traditional knowledge in most of their policy statements.

But they still haven’t figured out a way to provide stable funding to permanent participant organization’s like the Inuit Circumpolar Council and the Arctic Athabaskan Council.

But so far, no one has offered to take out their cheque book.