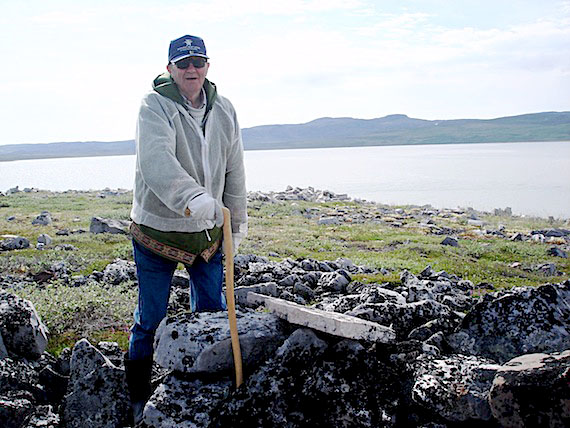 Bishop Jack Sperry, seen here at an ancient dwelling site near the community of Bathurst Inlet in 2008, died Feb. 11 in Hay River, Northwest Territories. He was 87. (PHOTO BY JANE GEORGE)

Sperry was born in Leicester, England, in 1924. He joined the Royal Navy in 1943 and served until 1946 on destroyers and escorts doing convoy duty.

After completing his tour of duty, Sperry immigrated to Canada in 1950, serving parishes in Kugluktuk, then known as Coppermine, and Fort Smith.

He served as diocesan bishop from 1973 to 1990 and is the author of Igloo Dwellers Were My Church, a memoir of his time in the North, where he learned Innuinaqtun and Inuit language skills.

A linguist, Sperry was involved in translating the Bible into Innuinaqtun for the people of the Western Arctic. He also translated scores of hymns that are still sung today.

In retirement, he worked with health and volunteer organizations, often visiting unilingual Innuinaqtun-speaking elders at Stanton Territorial Hospital, and also serving as a chaplain for the Canadian Forces in the North.

Until recently, Sperry also visited the Bathurst Lodge in Bathurst Inlet every July, where he renewed old friendships with the community there and shared his knowledge of the Bathurst and Kitikmeot region with visitors.

In 2002, Sperry was named to the Order of Canada. This week, it was announced he was to receive a Diamond Jubilee medal, created to mark the 60th anniversary of Queen Elizabeth II’s accession to the throne.

Sperry, better known as “Jack,” died in Hay River, surrounded by his family, his son John, and daughter Angela Friesen, and their families.

Close friend Page Burt of Rankin Inlet said Sperry suffered a couple of heart attacks this fall and winter, and was in delicate health.

“Knowing Jack, that is all that is necessary to be said. However, he leaves a great void in the hearts of people right across the North, and far beyond. He was a truly great man who brought much comfort and joy to people from all walks of life.”

Family members say, after a Feb. 18 funeral service to be held in Yellowknife, Sperry will be buried there next to his wife.

The location of the funeral has not yet been determined.