“Most of them live in deep water, and very little is known about them.” 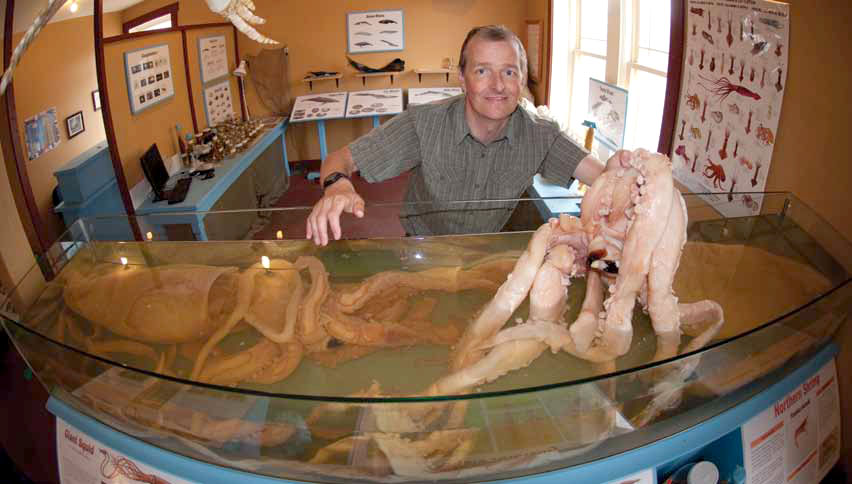 Jonathan Joy, instructor in the environmental technology program at Nunavut Arctic College in Iqaluit, with a pair of giant squid (Architeuthis dux) specimens in Newfoundland. (PHOTO COURTESY OF JONATHAN JOY)

No, it was not a mermaid, or a shark, or a watery version of bigfoot. With tentacles, three hearts, four pairs of arms and a squishy bell-shaped head, this sea critter was actually an octopus.

While the strange species drew gasps from Juralak’s friends, and even led some Nunavut residents to question whether climate change might be bringing the creatures north, it turns out octopuses are actually quite common across the Arctic.

“In the area around Baffin Island and Greenland there are something like five or six species of octopus that are known about,” said Jonathan Joy, an instructor in the environmental technology program at Nunavut Arctic College in Iqaluit.

“Some of them are quite big, up to six feet long,” added Joy. “Most of them live in deep water, and very little is known about them.”

The world’s oceans contain some 300 species of octopus. They live mostly on the seafloor, feeding off crabs, fish, shrimp and worms.

But it’s no wonder many in the Arctic aren’t aware there are any octopus dwelling in northern waters.

Since octopus lack skeletons, they can squeeze into tight places, increasing their ability to hide. Their ability to change the color of their skin allows them to adopt an instantaneous camouflage and blend in with their surroundings.

Some octopus use venom to stun their prey.

Australia’s blue-ringed octopus, even though it is “smaller than the mouse you use for your computer,” said Joy, is extremely venomous, and can even kill people — with death usually resulting from lack of oxygen to the brain.

But octopuses are also playful and intelligent. In aquariums, octopus have been known to play with toys and solve mazes.

Joy did not see photos of Juralak’s octopus but he speculated it was a species known as the North Atlantic octopus, or Bathypolypus arcticus, which are found off the eastern coast of the United States and Canada and as far north as Ellesmere Island and Devon Island.

The arcticus is a small octopus, weighing less than half a pound. They are typically found at depths of about 200 to 600 metres, Joy said.

Another Arctic octopus species, Haliphron atlanticus, is one of the largest octopus species on earth and can grow to be 12 feet [3.6 metres] in length and weigh 160 pounds (72.5 kilos).

Arctic octopuses are rarely seen but they sometimes show up often in the stomachs of toothed whales, like sperm whales, bottlenose whales and pilot whales.

In Pond Inlet, North Atlantic octopuses were found in the stomach of a narwhal.

“Squid and octopuses are very important in the diet of marine mammals and seabirds,” said Joy. “They are an important part of the ecosystem.”

And yet they are a part that most Nunavut and Nunavik residents know little about.

“I’ll be honest with you, I’m a regular hunter but I haven’t heard anything about octopuses,” said Charlie Papatsie, a hunter with the Amarok Hunters and Trappers Association, in Iqaluit. “It’s news to me.”

“I spend most of the summer out boating, and I haven’t come across anyone who has seen one either,” added Papatsie, who often hunts for seals near the mouth of Frobisher Bay.

As for the question of whether climate change is affecting octopus distribution, Joy said there is just far too little research about Arctic octopus species to make any sort of inference.

“There has been some work done further south,” said Joy, “but for northern octopuses there are a lot of unknowns. There just has not been a lot of work done in the Arctic on octopuses.”