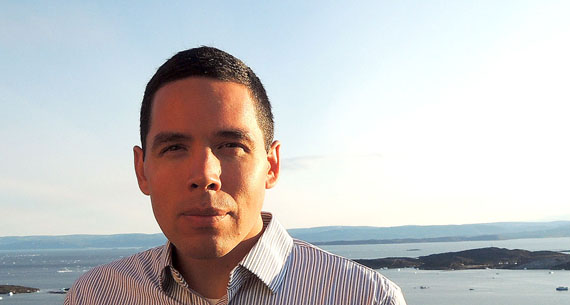 Nunatsiaq News has published candidate profiles this week, in alphabetical order, for the three people contesting the president’s position at Inuit Tapiriit Kanatami. ITK members and delegates will choose a winner at a general meeting to be held Sept. 17 in Cambridge Bay.

For Natan Obed it’s time to take the next step.

After a 14-year career serving Inuit in business development and social advocacy, mostly in non-elected administrative positions, he’s ready to put his education and experience to work as president of Inuit Tapiriit Kanatami.

“I’ve really matured and grown up working for Inuit orgs… I’m at a point in my career where I feel I have the ability to take on this responsibility. I believe in Inuit representation,” Obed said.

In the 1990s, he left his home in Nain, Labrador, to get a bachelor’s degree in English and American Studies at Boston’s Tufts University, where he also became a star defenceman playing in the New England college hockey circuit. He also played Junior A hockey with the Helena Ice Pirates.

After that he went to work for the Labrador Inuit Association, for whom he helped negotiate an Inuit impact and benefits agreement with the Voisey’s Bay Nickel Co., and where he developed and carried out annual budgets and action plans, and supervised a staff of five.

“Being involved in different Inuit governance structures, including the Labrador Inuit capital trust, it’s really formed a lot of clear views that I have about the role that Inuit orgs play and the priorities that we should have,” Obed said.

The first is governance — which means ITK’s operations must be healthy.

“ITK has to function well in order for the entirety of the governance system to function well, because a lot of the issues at the community level have clear connections with decisions at the national level that Inuit can influence,” Obed said.

But the policy areas that he’s most comfortable with and gets most passionate about are children and youth, mental health, suicide prevention, education and language.

“We need to ensure our children grow up in healthy safe environments and get an Inuit-specific education, and we need to ensure that those who are caring for those children are able to function and have the resources to provide a home or food on the table, or ensure they get the social and cultural and linguistic skills that we all say we want,” Obed said.

At the same time, he recognizes that it’s ITK’s four members — the heads of the four regional land claim organizations — who control ITK and set its political priorities.

And under Bylaw No. 2, which serves as the organization’s constitution, it’s those four members who effectively choose the president.

But that doesn’t mean the work of an ITK president is irrelevant, Obed said.

“The work that happens at the national level can be greatly influenced by the concepts and ideas that are put forward by the ITK president.”

And he said that leads to another important job that ITK continues to do and should do more of in the future: ensuring the fur-flung Inuit regions inside Canada stay together.

Those regional entities have all become centres of power and influence that did not exist when the Inuit Tapirisat of Canada was formed in the early 1970s.

“So there’s also the role that ITK can plan in bringing Inuit regions closer together, and that would be a priority for me as a side of the advocacy piece, a strengthening piece within the Inuit collective,” he said.

Not since 1996 and 1997, when Mary Sillett of Labrador was appointed by the organization’s board, has a Labrador beneficiary served as ITK president.

Since then, all of ITK’s presidents have come from either Nunavut or Nunavik.

But Obed is not suggesting it’s now Labrador’s turn at the top.

“No, I don’t think so. In this day and age I don’t think that picking somebody because they’re from a certain region is necessarily the most strategic way of selecting an ITK president.”

At the same time, his cross-regional resumé is still an advantage, he said.

He said Sarah Leo, the president of the Nunatsiavut government, already supports him, and that he will reach out to the other land claim presidents to promote his candidacy.

“I’ve also had a number of other people who sent me emails or stopped me on the street and encouraged me, so I’m really thankful for that,” Obed said.

And for regular beneficiaries who support him, he suggests that they send emails or letters to their respective regional presidents to make their wishes known.

He also supports ITK’s current four-member governance structure and said he believes the current method of choosing an ITK president — which usually involves a group of about 12 people — is superior to the pan-Arctic elections that were used until the mid-1990s.

That’s because the old system contained the potential for political conflict between the ITK president and the regional presidents.

“If the president of ITK had his or her own mandate and was elected by the general populace, then there’s a distinct possibility of conflicting priorities between the regional presidents and the ITK president,” he said.

“So it does make sense that the ITK board have more control over the ITK president,” he said.

Obed said he submitted his own declaration of candidacy, with the required 20 signatures from beneficiaries.

ITK members and appointed delegates will choose a president Sept. 17 at a general meeting to be held in Cambridge Bay.

The other candidates are: