The language everyone can understand: music 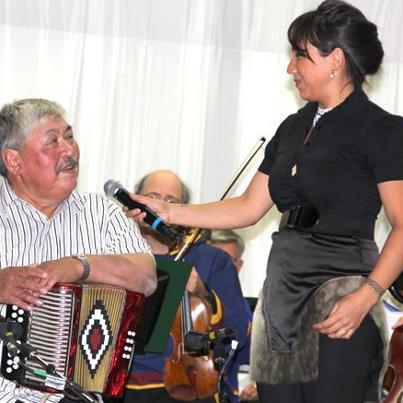 Pangnirtung’sSimeonie Keenainak talks with throatsinger Nancy Mike before his performance with the National Arts Centre’s orchestra Oct. 27 at Nakasuk School in Iqaluit. When Keenainak played some of his best-loved tunes with the orchestra, members of the audience got up and danced. (PHOTO BY SAMANTHA DAWSON) 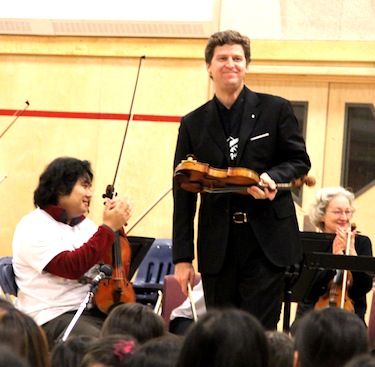 Canadian violinist James Ehnes played at the Nakasuk concert as well as at the Aqsarniit Middle School where he helped kids in the Iqaluit Fiddle Club with their technique. “It’s great for us to be able to interact more than just simply a performance where we go in and people see us from the stage and then we go home,” he said. (PHOTO BY SAMANTHA DAWSON)

When people in the packed Nakasuk School gym listened carefully to the sounds of the National Arts Centre’s orchestra Oct. 27, many in the audience may have felt they were out on the land.

The 20 musicians on stage were playing Canadian composer Alexina Louie’s piece “Take the Dog Sled,” which tries to recreate the rhythm of a dog sled moving across the sea ice.

For this piece, the musicians, dressed in traditional white and blue atigis, used their instruments in new ways. They plucked strings, hit chimes and used a violin to mimic the buzzing of a mosquito.

Throat singers Evie Mark and Akinisie Sivuarapik swayed back and forth while waiting for their cue from conductor Arild Remmereit.

For that evening’s performance, the first for the National Arts Centre in Iqaluit while on its northern tour, the orchestra’s percussionist Don Renshaw collected rocks from the tundra earlier in the day.

Louie wanted him to use the rocks by banging them together during “Take the Dog Sled.”

“No matter how hard it is, or how much of a struggle, it’s still worth it, I hope you enjoy the ride,” composer Louie told the audience before the concert started.

Audience member Cindy Bryant said the music sounded like ravens talking to each other.

“Typically, when you see the orchestra play it’s really rigid and formal, there’s sort of rules to how music is played,” she said.

But the Nakasuk concert seemed more fun and the conductor “seemed to sort of let loose.”

The evening also included a performance of Vivaldi’s Four Seasons and pieces by two renowned Nordic composers, Edvard Grieg of Norway and Jean Sibelius of Finland.

The orchestra normally plays larger venues, so playing in the Nakasuk gym in Iqaluit was “something very different” for the musicians, acclaimed violinist James Ehnes said.

“My travelling takes me to cities of at least half a million, three quarters of a million and up because that’s generally the demographic where there’s enough people with enough interest that will support us,” he said.

But the National Arts Centre understands the importance of visiting places where there wouldn’t normally be the chance for this kind of concert to take place, Ehnes said.

Ehnes, 36, performed classical music as the solo violinist in a white silapak, using fast jerky movements with the skill of a musician who has played all his life.

The rich tones of his 300-year old Stradivarius violin may have added to the performance.

As Ehnes played, many kids sat on the floor along the side of the stage watching intently.

He received a standing ovation after telling the audience they’d “been great hosts to us all.”

But it was accordion player Simeonie Keenainak of Pangnirtung who brought the house down, with people dancing and clapping while he played.

The audience applauded after he finished playing his popular accordion songs with the orchestra and the conductor — “they were so lively, I was so happy about it,” Keenainak said.

The orchestra’s visit was important to Iqaluit, he said, because “our music and Southern music can mix, [and] sounds really good,” he said.

Not only that, kids in Nunavut now have a taste of what other instruments sound and look like, such as trombones and trumpets.

“I’m sure our people in Nunavut can create music with these instruments in the future,” Keenainak said.