The Liberal’s government’s cannabis package: what’s in it? 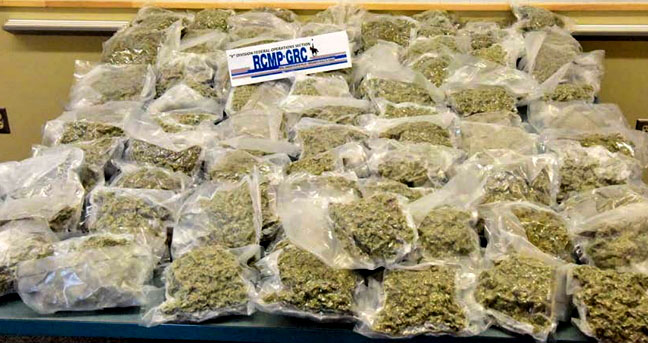 Here’s a 40-pound pile of marijuana that police seized from an Iqaluit man this past February. After cannabis is legalized in Canada, likely by July 2018, it will still be against the law for you to possess this much weed, and it will be against the law for you to sell weed without a licence. But you will be allowed to buy up to 30 grams of legal cannabis from a licenced retailer or distributor. Online mail orders will be legal too. (FILE PHOTO)

Though their cabinet ministers are touting it as part of a hard-line law-and-order policy aimed at keeping weed away from teenagers, the Liberal government’s cannabis legalization package, introduced April 13, will still give all adult Canadians access to legal cannabis for the first time since 1923.

But it won’t be a free-for-all.

The legislation, contained in Bill C-45, creates strict rules for the production, distribution and possession of marijuana and other cannabis products and requires that territories, provinces and municipalities create more rules to control and licence retail sales.

This means that Ottawa will control how cannabis products are produced in Canada, through a federal licencing system.

And territorial and municipal governments will decide how and where individual consumers can buy it and smoke it.

Another proposed new law, Bill C-46, gives police officers the power to extract blood or saliva samples from people suspected of driving while stoned on cannabis.

Here are some highlights of what the federal government proposes:

How much pot will I be able to buy legally?

You will be allowed to possess no more than 30 grams of legal dried cannabis, or its equivalent, at any one time. That’s equal to about one ounce.

Under the proposed new law, one gram of dried marijuana is considered equal to five grams of fresh cannabis, 15 grams of an edible product, 70 grams of a liquid product, or one cannabis plant seed.

If the police catch you with more than 30 grams but less than 50 grams, they can give you a $200 ticket.

If they catch you with a significant amount of illegal weed, they can charge you with an indictable offence that carries a maximum penalty of five years in jail.

You will also be allowed to grow up to four cannabis plants anywhere in your residence, up to a maximum of one metre in height.

But territories, provinces and municipalities will be able to place more restrictions on the personal cultivation of marijuana, if they wish.

Where will you be able to buy legal cannabis?

You’ll be able to buy cannabis from a licenced retailer authorized by your territorial or provincial government.

But the Government of Nunavut, like most other provinces and territories, hasn’t decided how it will regulate the retail sale of cannabis and they haven’t yet decided where you will be able to legally buy it.

So for Nunavummiut, this is still an unanswered question.

But even if there are no authorized retailers in Nunavut, you will still be able to buy legal cannabis after Bill C-45 becomes law.

That’s because any adult in Canada aged 18 or over—living where there are no authorized dealers—will be allowed to order legal cannabis online from a federally regulated distributor for delivery by mail.

Also, it will be a serious criminal offence for any unlicenced or unauthorized person or organization to produce, distribute or sell cannabis.

How old will you have to be to buy legal cannabis?

The federal government’s proposed new law sets 18 as the minimum age for the purchase of legal cannabis.

But provinces and territories will have the power to raise the minimum age within their jurisdictions as they do with alcohol consumption.

What happens if you’re caught selling cannabis to a minor?

The new legislation creates a harsh new penalty for adults caught selling weed to youth aged 17 or younger: a maximum sentence of 14 years in jail if the Crown opts to prosecute you by indictment.

A prosecution by summary conviction for selling cannabis to a minor carries a maximum sentence of six months in jail or a $5,000 fine.

Where will I be allowed to smoke dope?

Territories, provinces and municipalities will have the power to ban the consumption of cannabis at restaurants, bars, cafés and music festivals.

Municipalities will also be able to use zoning bylaws to control where cannabis may be sold or consumed and prevent public dope smoking from becoming a nuisance.

What if I need medical marijuana?

A separate system for supplying marijuana to people for health care purposes will continue to exist.

If you need marijuana for a medical purpose, you may continue you to do so under the authorization of a health care provider.

Can I buy or sell marijuana internationally?

However, you will be allowed to carry legal quantities of cannabis across territorial or provincial boundaries, as long as you respect the minimum age in each jurisdiction.