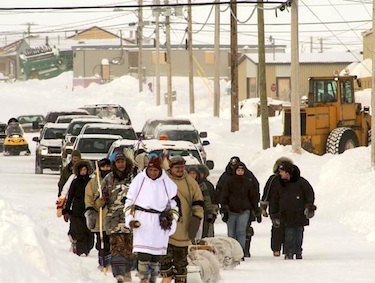 Here, in January, the Nishiyuu Walkers leave the community of Whapmagoostui and Kuujjuaraapik to head on their 1,600 journey to Ottawa. They will all back in Kuujjuaraapik for the weekend. (PHOTO COURTESY OF NISHIYUU)

After a 1,600-kilometre trek that started in January and ended when the Nishiyuu Walkers reached Parliament Hill March 25, the seven walkers haven’t yet been able to put their feet up and rest.

That’s because they have spent the past few days participating in different events around Ottawa, such as a youth forum.

But on March 28, Stanley George Jr., Johnny Abraham, David Kawapit, Raymond Kawapit, Geordie Rupert and Travis George, and guide Isaac Kawapit, are due back to Whapmagoostui, with a big feast planned to take place later in their honour.

Matthew Mukash, a former Grand Chief of the Grand Council of the Crees in Quebec and Nishiyuu spokesperson, said “everything was a success” about the walk.

“All in all, it was very good,” Mukash told Nunatsiaq News.

“They wanted to show their culture, how our ancestors travelled,” he said. And the walkers achieved their goal to promote “unity, especially [to] the young people.”

Even before the walkers arrived in Ottawa, he said signs that the “Journey of Nishiyuu” was a success were there: some walkers spent 24 hours in another small Cree village north of Gatineau. During that short amount of time, seven babies were born.

“We took that as a message,” Mukash said.

All of the original seven walkers were under age 20.

David Kawapit celebrated his 18th birthday during the trek. Like many other young residents in his home town of Whapmagoostui and neighbouring Inuit community of Kuujjuaraapik, Kawapit is part Inuk and part Cree —the child of Hannah Kawapit and Raymond Mickpegak Sr.

He’s the one who came up with the idea of the walk, inspired by the Idle No More movement, to “ensure the next generation of youth have good lives, ones where they don’t have to fight for their native rights.”

Another Inuk youth, Mary Tuckatuck, also from Kuujjuaraapik, joined the walk from Chisasibi.